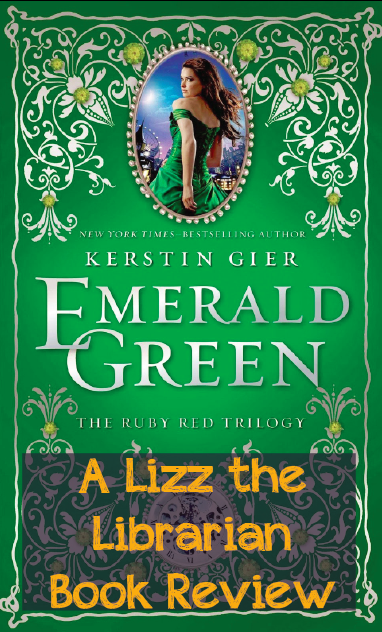 
Why Did I Pick It Up: I've been reading the series - this is the last entry. Sigh.
The Good: I just want to remind everyone really quickly that these books are translations from the original German. Seriously, these don't read like translations. These are beautifully written, eloquent, and the translator deserves a giant gold star and a big cookie.

Gwen's life isn't getting any less complicated and Gideon isn't helping matters. Communication is key people, but I suppose this all adds complexity to the plot. I usually can tell where a book is going by the third volume, but for these I had no idea. I didn't know who their arch nemesis was, I didn't know what was going to happen, and that whole bit with the secret item - no spoilers, but wow.

I love that three books in I'm still feeling surprised. I thought I would have bored of Gwen and Gideon's life by now, but I totally haven't.

And the ending, well, I liked it. It was just right.

The Bad: I feel like the secondary relationships are a little too perfect - to neat and tidy. Too YA book feeling. I know this is a YA book, but the rest of it doesn't read that way. They had tidy relationships and tidy good-guy-bad-guy status by the end of the book and that wasn't really keeping in line with all the gray areas that had been around the rest of the time.

The Ugly: If I've gotten to the third book in a series, odds are I don't have too many problems with it. Since I liked the ending I'm not longing for more volumes, although if there were I'd probably read them.

Who will love this book? Obviously, the people who read and enjoyed the first two :)
How much did I like it?  8.5/10

Will I read more? Sadly, there isn't anymore

Posted by Lizz in Bookland at 9:26 PM