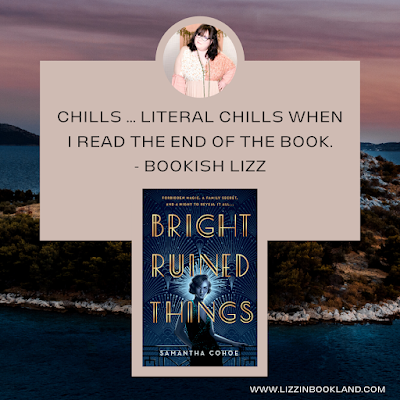 Transparency Note: I received a complimentary copy of this book from NetGalley in exchange for an honest review.

CHILLS. I finished with actual chills. When was the last time a book gave me actual chills? I can't even think of a time honestly. I'm a little obsessed with this one, let's get into it.
Worldbuilding: So, there could have been more. I felt a little like I was dropped into the story. I know this is because of the way the story ends up panning out. More history would mean less mystery. I'm willing to make the trade. However, for the first 20% of the book, I didn't realize it was a big mysterious thing (it literally says this on the cover, but obviously I missed this) and so I felt like I was just missing something. Really this is about my ineptitude as a reader.

Plot: Again, I felt like I was dropped into the story that had already started. It's like missing the first 20 minutes of a movie. What were Mae's days like before the story started? Did she have interactions with Ivo? Where did she eat? She describes living in a shack, but is it a literal shack? What is her LIFE LIKE? I really do want to know. I'm also curious if the grandfather is always on the island, or only during the holidays - maybe this is referenced and I missed it. Does Mae have regular interactions with him? I would stay this story is plot-based. The story itself was addicting and made me stay up far too late to finish the book.

Characters: My favorite character is clearly Ivo. From the moment we meet him. If you don't agree I don't think we can be friends. I rarely get to know this much about characters from when the story is told in the first person (in my opinion, I know lots of people disagree). But I KNOW these characters. Also, I felt like there were character arches even though the whole book takes place over only a few days. I need more Ivo. I need an Ivo short story or something. More Ivo.

Overall: 4+ stars. I'm a little OBSESSED with this book. Honestly, that ending has me pretty enraptured - even now, the next day. I really want a sequel, but I'm pretty sure this is a stand-alone. It is better that way. I don't love neat little bows at the end of books, I'd rather have it end the way it did.

If you love magical realism, you will love this. I would actually recommend it to people who like The Raven Boys (ie, my favorite books of all time). Although there isn't as much character depth (which is fair, this is a single book), this book pulled me in emotionally. That's why it gets four stars - I really contemplated five stars, it might change on during a re-read (which I'm already planning, I know, this is how I am).

Note on my star rating system:
* DNF or really loathed
** Didn't enjoy or there were major issues with the story
*** Average read - most books I read are three-star books. They are good stories I recommend, but they didn't change my life.
**** - Amazing. Seriously. AMAZING. I've already been recommending it. I'm already adding the author's other books to my TBR. I am having a hard time starting a new book because it was so good I can't stop living in the story just yet.
***** - Life changing. Everything a four-star book is, but MORE. I'm already planning a re-read. I've bought it in a second format. I'm comparing the characters I love to other characters I love. I'm in love with the story. I'm referencing it in my daily life.
Posted by Lizz in Bookland at 11:40 AM