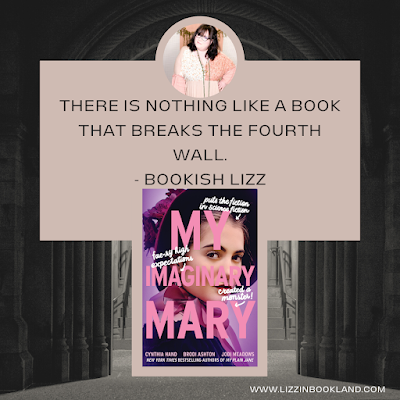 Transparency: I received a complimentary copy of this book in exchange for an honest review.

This title will be released August 2, 2022 from Harper Collins Press

What a ride. There is nothing like a book that breaks the fourth wall so frequently and with such abandon for traditional writing. This trio of writers does like to take a non-traditional route through historical fantasy and I've enjoyed the ride.

World-Building: The book is set up with several famous characters that you'll recognize (or, at least, you should) and if you're totally lost, our dear narrators will fill in some of the gaps as they frequently address you (the reader) directly while relaying the story. Because this is set in historical London the world is one that we recognize and we don't spend too much time learning about what we should already know. The magical elements are a surprise to the characters just as much as they are to us, the reader, so they are explained well. I'm actually quite satisfied with how well the rules of magic are explained.

Plot: The plot is described in detail ... excruciating detail. Barely a breath or move is made that isn't relayed to us directly. This makes the plot drag a bit throughout. I know many readers enjoy this level of detail in the plot, it just isn't my personal cup of tea. The story itself is exciting and the added detail of having the narrator address me directly while reading is actually a fun element, even though if used more sparingly it might be more exciting.

Characters: Alas, it is hard to read fictional tales about real people. I so love one of these poets who turned out to be quite an unsavory character in this story. However, I'm willing to let that go. Our trio of authors do a good job at building characters, but I'm not sure they grow over the course of the book. They make changes to their lives, but do they grow? I'd argue that they do not. Without giving any spoilers, as I'm remiss to do with a book that hasn't even come out yet, I don't feel that these characters, even though we know them for weeks, change in any significant way. Normally in a series I'm willing to forgive the lack of character development in a single title, but this series won't revisit these same characters (at least, I don't expect it to) and so this was their one chance to grow, change, learn about themselves. I'm disappointed that they don't seem to have grown from their numerous mistakes.

In the end the book was a fun jaunt into a fictional mis-telling of real historical people. It was quite fun to see what could have inspired Mary Shelley's most famous book.

Note on my star rating system:

** Didn't enjoy or there were major issues with the story

*** Average read - most books I read are three-star books. They are good stories I recommend, but they didn't change my life.

**** - Amazing. Seriously. AMAZING. I've already been recommending it. I'm already adding the author's other books to my TBR. I am having a hard time starting a new book because it was so good I can't stop living in the story just yet.

***** - Life changing. Everything a four-star book is, but MORE. I'm already planning a re-read. I've bought it in a second format. I'm comparing the characters I love to other characters I love. I'm in love with the story. I'm referencing it in my daily life.