Thirteen Reasons Why
by Jay Asher 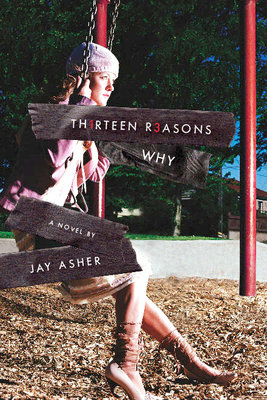 I started this book a couple of days ago and usually start my reviews then. But I wasn't looking forward to it. I was, I picked it to read, and I am doing a book talk on it tomorrow, but the subject matter is a little icky for me.
Hannah Baker completed suicide.
A Baker's Dozen tapes have been left for the thirteen people who brought her to that decision.
Clay is one of the thirteen.
On the surface this is Hannah's story, it is her feelings and thoughts spoken out loud for all to know. But beneath that, just under that surface, the story belongs to Clay. He is dealing with a friend's suicide, he is dealing with know that he is one of the reasons she is gone, he is trying to hold it together.
Hannah isn't always a sympathetic character, she blames herself for so much. She internalizes everything, every little thing that happens is thrown into her life in such a personal way.
Clay doesn't see life that way. He is hurt that he even has to listen to the tapes. He is hurt that Hannah hurts. He is concerned that no one helped her - even himself. He hates people that hurt her.
Clay is the reason to read this book.

I hope that the subject matter doesn't scare you off. It really is a fantastic read. It is quick too.
Most of all, it feels so honest, so genuine, so real.

Hannah might be gone, but she is Clay's guide to the path of healing and forgiveness.
You can't hold yourself responsible for everything.

You can share your thoughts after reading the book here

More facts about Suicide and ways to help after the break

Worldwide there are more deaths due to suicide than to war, accidents, and murder combined

Over 34,000 people in the US complete suicide each year

That means every day approx. 94 people complete suicide, and 2,400 others attempt suicide

Currently suicide is the 11th leading cause of death in America

Over 90% of people who complete suicide have at least one psychiatric illness when they die, usually depression or drug/alcohol abuse

20% of American High School Students report having seriously considered suicide in the past year.
8% of high school students make a suicide attempt

4000 teens die every year as the result of suicide

80% of people with depression are treated successfully

One person dies by suicide every 16.2 minutes

Spring months have an increase in suicide rates, Christmas shows a decrease

In terms of ethnicity, Caucasians have higher suicide rates than African-Amerians

The Warning Signs
How to help a friend
ASIST Training
Posted by Lizz in Bookland at 11:15 AM