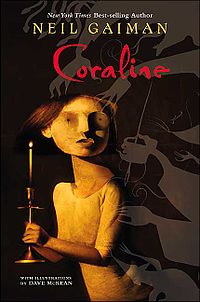 Shhhh, don't tell! But I had never read Coraline all the way through before. Did I see the movie? Yep. Did I think I had read the whole thing? Yep. But the ending was a surprise for me!

Coraline is a strong girl (nothing like Little Red Riding Hood, who I am researching right now) who does not need a hero, she is the hero! Her life is like your life (or your childhood life), she is bored, curious, and stuck in a house all alone (well, her parents are there). Her parents cook food she doesn't like, don't have time for her, and she has just moved. I love how strong Coraline is! When she first looks under the bed at the rats, I wouldn't have gotten any closer to those glowing red eyes!

Coraline is billed as the Alice in Wonderland of this generation. I don't mean to be rude, but I like to think that Alice is Wonderland is the Alice in Wonderland of this generation. Holding it up to such a high standard makes it fall a little flat. Now, this isn't some great literary work, so I understand that it isn't very multilayered, but at the end I really wanted Coraline to demand a little more of her parents. However, this features a bit of a non-ending that reminded me of Where the Wild Things Are (which is fantastic, don't get me wrong).

Should you read this book? Yes, because it is a modern classic. Not many people are writing Fairy Tale stories anymore and this is a great one. Who should read it? Well, sad to say, I'm an adult (but I loved this book) so I think anyone adults and below would really enjoy it. I would like to note that it is a little scary, and maybe even a little creepy, so maybe third grade and up is a good age range.

What I'm Doing With It:

After a very democratic voting process in the After School Program I do outreach from my library at, the kids chose to hear Coraline read aloud. These third through fourth graders are usually chatting, hitting, and moving around - but now, Coraline has settled them right down. This is really a great read aloud book! 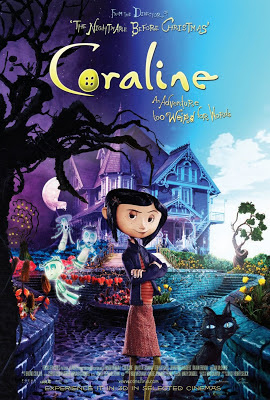 Posted by Lizz in Bookland at 8:29 PM