Books as Television Shows ... is it a good thing?

This post can also be found on This Side of My Screen where I am a guest blogger this week! 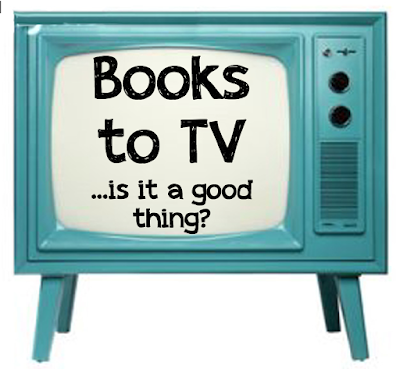 Fangirls and fanboys love to know that one of their fandoms are coming to the screen. There is a moment, right after the pure elation, that I panic for a moment as these words go through my head:

Oh No! What if
via GIPHY


We've all seen it happen, from terrible casting to awful scripts, to horrific special effects ... there are so many things that can go wrong. I try not to worry about it, but those what ifs sneak up on me. When I read my imagination goes crazy, I picture everything and the characters really live in those scenes. Movies are almost worse because they are taking something huge and boiling it down to an hour and a half ... usually losing all of the magic that makes it great.

Television shows have the time to tell the whole story ... but they lack the budget or something to truly bring the depth of the book to the screen. Books that are really plot driven do well on the screen (Vampire Diaries, for example), but ones that are character driven struggle (Shadowhunters, in my opinion).

Whether you are a Shadowhunter or a Mundane (or a Downworlder) you might be trying to figure out if the new show is ... good. I mean some of the lines fall flat, some of the actors seem to be awkwardly fitting into their roles. My friend suggested a six episode test and I'm trying ... but Magnus in episode 4 was so, well NOT Magnus, that I'm struggling.

Will we learn? Will it get better? Do we just have to accept these screen versions of our favorite books?
via GIPHY
I feel like, as a fan, I shouldn't have to accept a poor representation of my favorite books. Instead, I'd rather sit back and demand that books be made into more quality adaptations. However, once they make a show or movie it is hard not to watch it, even if it is bad.

Because of this, I'd rather not see a favorite book be made into a movie or television show.
via GIPHY

On the other hand, books I only sorta like or don't like at all (I don't like plot driven anything), seem to be great for screen adaptions (I'm talking about YOU Game of Thrones).
via GIPHY
I also didn't like the books for The Vampire Diaries or The 100, but The Vampire Diaries is one of my favorite TV shows (especially now that Elena is gone).

This is the beginning of my book to television series. Stay tuned for posts about my favorite book to TV shows, my least favorites, upcoming ones to tune in for ... plus movies that flopped but should be made into TV shows.

So I'll ask you, do you like television shows made from books? Is there a book you'd love to see made into a television show? Do you avoid TV and just read? Do you disagree with everything I've just said? Join the conversation below.
Posted by Lizz in Bookland at 5:49 PM

Email ThisBlogThis!Share to TwitterShare to FacebookShare to Pinterest
Labels: Alice in Wonderland, Book to Television, fandom, Game of Thrones, Shadowhunters, The 100, The Mortal Instruments, The Vampire Diaries