It really should go without saying that this is full of both book and movie spoilers. 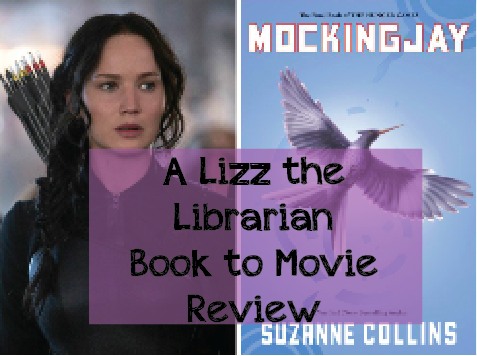 There is nothing quite like seeing a book you love brought to the big screen. There is a romance about seeing characters and places in real time right there in front of you. Now, before you roll your eyes and give me the classic, movies aren't as good as the book speech, let me tell you that I know. I am the biggest believer that the book is always better. But now that we are three movies in, I'm over the fact that Peeta was poorly cast (okay, nearly over) and that as much as I love J-Law, I didn't really picture Katniss like that (and the training centers, those are weird too). Okay, but seriously, even the flaws that are everywhere because this is a movie people, don't take away from how much I really do like these films.

1. Since I'm fully #teamgale I'm totally on board for the increased Gale presence in the movie version.

2. Jennifer Lawrence's emotional pull in this movie was epic ... seriously, even though she didn't look like the Katniss in my head, she was amazing and I wouldn't want anyone else to play the part.

3. I love getting to know Prim more.

4. It wasn't that visible to me in the book, but sober Haymich and undone Effie are such "real" characters now. I love that their defenses have been stripped away and they are still #teamkatniss all the way. Dedicated and understanding. (I realize that Effie wasn't in District 13 in the books.)

5. Unlike other movie reviewers, I don't think that this whole first part should have been skipped. If we don't care about the characters, if they aren't full developed, how will we care what happens to them in part two? We have to love Katniss, Gale, Peeta and Prim now so that we can laugh and cry with them in part two. Is there any laughing in the Hunger Games? Probably not. That isn't a spoiler, that is just a fact.

Where was all the distrust of President Coin? I feel like it was there, just lurking under the surface and I was looking for it. Where was Katniss' lamenting about how dishonest this new President is? Where is her comparison of how this was just a new cage? Will that come in movie #2? I felt like that part of the book really needed to be a part of the movie and was missed. How will that effect the ending?

The Ugly - or big differences as sited here

1. Effie in District 13 - can you imagine if Effie weren't here (I realize you've seen it in the book)? Effie is my favorite character - I have a dog named Effie Trinket for goodness sake! Katniss needs Effie and she is an important piece of showing Katniss' slow breakdown.

2. Where is Finnick? Although we do spend lots of time with Gale and Prim, we spend little time with Finnick. In the books I didn't like how much "page time" Finnick got. He was never a favorite character of mine and so I wasn't sad to see less screen time for him in the movie. Finnick really is a secondary character who I think is around simply for the eye candy of it all.

3 and 4. The Final Propo and the Rescue- does anyone really care that Finnick handled this one leaving Katniss to watch the rescue? Are we sad that Katniss got to see the rescue? Nope, I'm glad that I was able to bear witness to this. In the book I felt like that whole part was rushed just to get to crazy Peeta. However, in the movie we needed that. When you bring something to film the tension has to be cast in a different way - I can't believe I'm defending film differences, but these are good changes.

5. As for Katniss not demanding to kill Snow, well I guess I like this Katniss better. She isn't so blood thirsty and in the book that demand felt out of character for her. She nearly had a mental break after killing ONE person in her first Hunger Games - she doesn't even feel like the Mockingjay yet, let alone have the power or desire to kill a person in cold blood. Even President Snow. The way the scene was played out and how hard she was fighting for the rescue, asking for another BIG thing would have felt like a lot, played the scene out too long. Collins is one of the writers/producers on the movie so I don't think we are in for a total ending rewrite just because of this little thing. But, you never know.