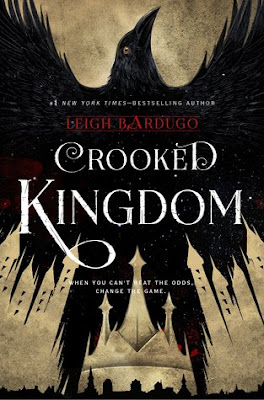 Crooked Kingdom by Leigh Bardugo
My rating: 5 of 5 stars


Kaz Brekker is one of the most well-developed characters in ya lit. I said it and I stand by it. It is SO RARE to have a character whose past is fully developed, whose life at the beginning of the books is fully developed ... and then have such a detailed, slow, and amazing change from the beginning to the end WITHOUT becoming a different person.

Dear Kaz Brekker, I love you. But I really love you with Inej so don't change. Or keep changing. But do it for her. Shoot, now this is all spoiler-y and I'll have to put a warning on it.

Since we are talking spoilers, I'd like to say that Kaz's gloves are their own character in these books, and when that character isn't present when he meets Inej at the end and then goes to meet her parents I am THRILLED. One of my favorite lines from Kaz 2.0 is "is my tie straight." Because Kaz from the beginning of book 1 wouldn't even be standing there, let alone worried for his appearance (although we know Kaz is always a little worried about his appearance).

Okay, I'm done obsessing (no, I'm not, but I'm about to film a YouTube video where I can continue obsessing).

Posted by Lizz in Bookland at 8:35 PM