Book Review: The Rose & the Dagger 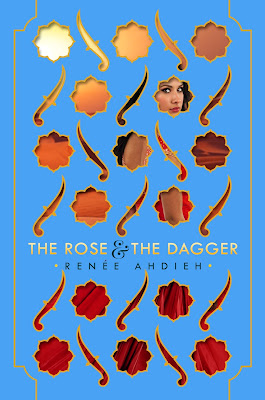 The Rose & the Dagger by Renee Ahdieh
My rating: 5 of 5 stars

At one point in the story a mosaic table is described as if the creator had taken something beautiful and smashed it to make something less so. That line, and so many others, made me pause because it was so fantastic. Lines like that are written by gifted authors. (Note: not a direct quote, I can't find the direct quote, but it's awesome).


Shahrzad and Khalid's story becomes so much more. I didn't have high hopes for this book. I mean, they were already in love and that was the driving part of the plot throughout the first book, so I expected this to be a bit dull. I was pleasantly surprised when it was not. Although their love it the underlying current to the whole story, neither character is weak for it.

Okay, so I know everyone hates Twilight comparisons, BUT here we go anyway. That is a story where two characters are made weak because of their love. They are LESS together than they were before meeting.

However, in this story our main characters (and even minor characters) are shown as greater because of their love. How beautiful is that! They want to be more, want to be better, want to be deserving of each other and it is utterly fantastic.

Finally, it wasn't until a friend pointed out the narrator's pronunciations that I realized it. And once I realized it, I couldn't get them out of my head. She mispronounces so many words. I had to finally just let it go because I didn't want to get held up in the story. But that was the only thing that really bothered me in the story. I would have liked more about the magic, but at the same time, it was nice that it wasn't the main focus of the story (someone learning magic ... current crutch of the YA world).

Whatever the original reasons were that I didn't want to read this story are obviously meaningless because this duo was excellent.

Posted by Lizz in Bookland at 7:43 PM

Email ThisBlogThis!Share to TwitterShare to FacebookShare to Pinterest
Labels: Book Review, Renee Ahdieh, The Rose and the Dagger