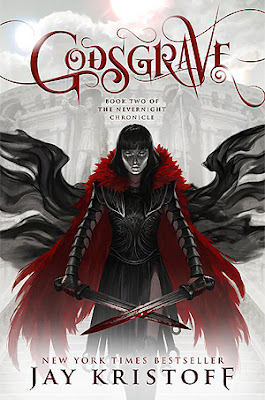 Nevernight by Jay Kristoff
My rating: 5 of 5 stars

This book was a gift from Camille for Christmas. I've been listening to so many audio books that I forgot what a slow reader I was, haha. But there is something nice about getting tied up in slowing down and reading actual words on a page.

As with any book I throughly enjoyed, I'm going to be vicious in my review ;)

Mia, a fierce orphan bound and determined to avenge her father's killer sets out on a journey to train and join a league of assassins. After a dangerous journey through the desert where she and Tric almost die, they arrive at a school of sorts. But, before this sounds like every other school based story you've read, know that Mia is darken, which means she can control shadows and has a cat shaped shadow named Mister Kindly that follows her around and eats her fear. Intrigued? Well, you should also know that these students aren't getting punished Dumbledore style, but just die when they make mistakes. Want to keep reading? I thought so.


The whole school setting was fantastic. I got hints of Harry Potter in classes like poisons (which reminded me so much of potions) but they had great names - their poisons class was called Truth. In fact, Kristoff's whole way of writing made everything so enjoyable ... but I'll save that discussion for a minute.

The characters were wonderfully fleshed out ... except when they weren't. These background characters would do something or die and they would be introduced for the first time. This felt a bit haphazard.

The other issue I had with the book was the ZERO CHEMISTRY between the two love interests. Were their encounters steamy, for sure, but I didn't get the impression that they actually cared for each other. Now this can be for one of two reasons. Either the author was purposefully showing that in a stressful situation people who don't actually like each other find comfort in one another OR Kristoff was using steamy scenes as a substitution for writing actual romance. I don't think it was the second one because of how well crafted the rest of the story was. Let's talk about that.

Seriously, Kristoff makes the reader LAUGH. Not because the story is funny, but because of really well crafted phrases, comments, and occasionally breaking the fourth wall. I loved this, especially at the beginning because sometimes it is hard for me to initially connect with a story (not this one, I loved the shadowing of the two stories in the first chapter).

I didn't talk about the plot or the world yet, where is this review going? The plot is something that is expected. We know this story; a story of a "magical" school (although this isn't really magic) and a story of revenge. This story follows in expected footsteps. Except when the floor falls out from beneath us as readers and something totally shocking happens. That's all I'll say, spoilers and all, but it kept what could be a tired theme from feeling overdone.

The world building is a smidge on the vague side, but it could be because I had a hard time concentrating on all the gods and who worshiped whom. I think we will see more of that in book two, at least I hope we will, because Mia is bound to figure out more about what she is.

I'll finish this up, it was all over the place (my review, not the book), which tends to happen when I like a book. It was great and I'm super looking forward to book two (which DPL doesn't have on Overdrive, what?!).