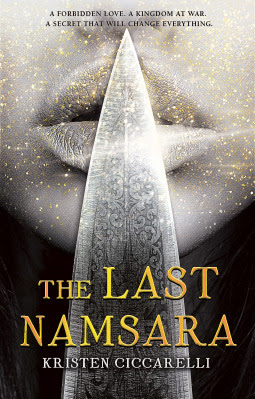 The Last Namsara by Kristen Ciccarelli
My rating: 3 of 5 stars

Asha isn't just a girl. You know how when you start books you think, well, there is this girl. But she isn't a girl. The book opens with her fighting a dragon, pretty much by herself, because it is her job. She is the princess ... well, no she isn't, but her father is the King. Okay, let's talk about this before I make a mess of the structure.

Luckily, her BFF and cousin ignores these rules, when they are alone, so Asha isn't totally isolated.

BUT, Asha's job is to hunt dragons. Even though she is Iskari and is essentially an outcast, her father has helped her, trained her, molded her into a dragon hunter. She is fierce and amazing! Best of all, in defiance to her father, she calls them with STORIES. Brilliant.


Oh, and there is a boy. But he is a JERK. They are betrothed ... and they despise each other. But marrying the Iskari is a powerful move.

However, there is another boy, a slave, the slave of her betrothed (sheesh, I cannot remember his name, I should take notes). He thinks the rules and his place are nonsense. He makes eye contact, he touches her ... he even helps her as she starts to pass out. Only it was in front of a bunch of people. And now he is going to be put to death.

The plot is pretty dense in this story, which is awesome. There is the storyline of the dragon killings. The "old one" whom I'm fairly certain is their version of god who gifts Asha with amazing things and helps her learn where her father has lied. She is engaged to a super jerk, and is falling in love with his slave. Plus the slaves are revolting, the country is changing, and that is all undercurrent.

So, A+ on plot. The world building was pretty good too. There was enough history to help me be not totally confused. Sometimes when listening I tune out on the important history bits, but I like how these were presented, giving me a full look at the story.

However, you know how characters are my favorite part of a story? Well, that's where this book falls flat. That is why I'm giving it three stars instead of four. Really, it is a four star story. I mean, Asha calls dragons with STORIES. What is not to love? Well, the characters were a little flat for me.

Asha is awesome, we learn a lot about her, but the other characters all rotate only around her. Dax is one of the few exceptions to this, but we know almost nothing about him. There are like two secondary characters and, again, we only see them in glimpses as they relate to Asha. Torwin, our love interest, is possibly the character we know the most about, but it is because we are learning about him as Asha is.

In the end it was a good story, full of dragons and excitement. If characters aren't a hangup for you, you'll probably love this.

Posted by Lizz in Bookland at 9:42 PM