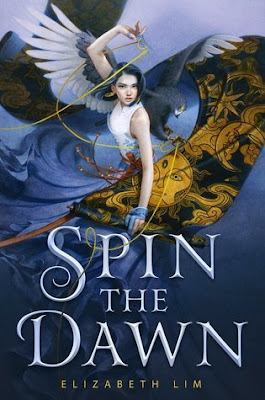 Spin the Dawn by Elizabeth Lim
My rating: 3 of 5 stars


So this was described as being Mulan + Project Runway, and I think if you add a Genie in there, it's pretty much a spot-on description for the book.

Here is what I would have wanted. The first book in this series to go through the contest, creating more drama, character development, and world-building (which this book has almost none). Really drawing out Maia getting to know Edan.

Then in the second book Edan and Maia go on a journey to collect (well, stuff so I'm not spoiler-y).

But, alas, this is only a single book.

World Building - 2 stars - really is just done on the fly when necessary.
Character Development - 3 stars - the two main characters are somewhat developed, but none of the secondary characters were more than just glimpses.
Plot Pacing - 3 stars - so rushed. Because of the rush through the plot (which should have been two separate books), we miss out on all of the world-building and character development.

The story itself was pleasurable, interesting, and I never considered stopping to read, so it is a solid three-star book. I would have just liked more with some changes and a less forced feeling romance.

However, the audiobook also presents some problems. The narrator reads VERY slowly. I listened to most of the book on 1.75 time and it was just at reading level. Normally I'd never be able to listen to a book that fast. But I could still hear every word, there were pauses at the end of sentences and chapters. Keep that in mind if you decide to listen.

Posted by Lizz in Bookland at 9:02 PM