Book Review: Sky in the Deep 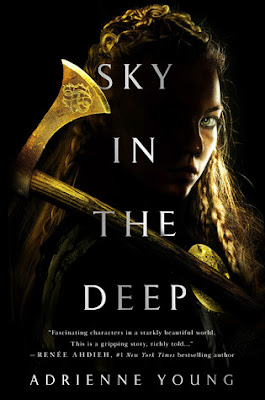 Sky in the Deep by Adrienne Young
My rating: 3 of 5 stars


Why? Why are all my books three-star reads? Because three stars is a C, a C is average. This book, and so many others I read, are average. AVERAGE ISN'T BAD. They are just the mid-line for what is YA literature.

Sky in the Deep was a fun read. I referred to it as "sorbet" because it was light, quick, and refreshing in a month filled with heavy, complex reads.

The plot was fairly predictable. From the moment we meet the characters we know who is falling in love and what is going to happen. My guess from the beginning played out pretty much as I expected. The story is definitely plot-driven, meaning it is where the author spent the most time developing the story. I'm not at all mad at the plot, I just could guess where things were heading. It doesn't mean I didn't enjoy the journey.

Worldbuilding. Do you hear that echo? It's because there wasn't really any. Why are all these clans at war? I don't actually know except that they always have been. Their lives are built around this constant war and I feel like I know nothing about it. Was their peace at some point? Who is the strongest clan? Who is the weakest? Who is the largest? But my biggest question is WHY ARE THEY FIGHTING? Do they want each others land? Are there supplies? Are the gods blessing them for the most lives taken? What is the purpose of the fighting season?

So, because of my questions, it's a three-star read. I actually did enjoy it. It was fun and quick. It just wasn't something I'm going to remember, but that's okay too.

Posted by Lizz in Bookland at 8:30 PM