This book was suggested to me by our amazing YA librarian Joan. It looks exciting and I'm starting it this morning, but I thought I'd start to tell you a little about it. 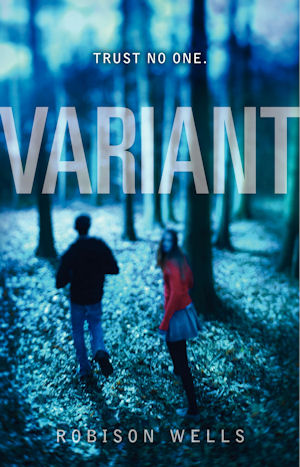 Trust No One ... that is always an exciting tag line! I love a great dystopian story and this one does not look like it will disappoint.

Here is the HarperTeen Summary: Benson Fisher thought that a scholarship to Maxfield Academy would be the ticket out of his dead-end life.
He was wrong.
Now he's trapped in a school that's surrounded by a razor-wire fence. A school where video cameras monitor his every move. Where there are no adults. Where the kids have split into groups in order to survive.
Where breaking the rules equals death.
But when Benson stumbles upon the school's real secret, he realizes that playing by the rules could spell a fate worse than death, and that escape - his only real hope for survival - may be impossible.

How does that not sound fabulous????

Until you can start it, check out Robison Well's website and watch the book trailer::

Benson thought he was making an upward move to a better life by getting accepted to a super elite private school and getting away from Forster Families that were a mess. However, after only a day of his "new life" he is already wishing to go home. No one leaves, the rules are insane, and it is like whoever is in charge is playing with their lives.

Did anyone see that show, Persons Unknown? This book totally reminds me of that, but it is kids instead of adults.

My thoughts so far are, what is going on? Who is in control? Why do they do crazy things? What happens when you go to detention? I have lots of questions, and the more I read, the more questions I have. Variant is turning out to be a thrilling read and I'm going to go and read some more :)

Now that the olympics are over, maybe I'll finish a book!!

Things are beginning to be a little more routine for Benson, but there are still so many secrets. How are people dying? What happened in Jane first came? Why aren't they trying harder to leave??? I love not knowing, it makes the book SO much more exciting :) I'm ready for a sneak peak at what is going on though, I feel like I have more questions than answers and I am starting to get frustrated (much like Benson).  Hopefully Wells gives us (the reader) something soon!!!

I stayed up late because once this book tells you one secret, you can't put it down! Little did I know while complaining yesterday, that I was a mere three pages from a shocking reveal! I sped through the last half of the book because I knew I wouldn't be able to sleep if I put it down - what was going to happen? Who would live? Who would die? Who was good? Who was bad?

Move this one to the top of your "to read" list immediately because it is that good ... but the ending is going to leave you hanging, so know that the sequel, Feedback, doesn't come out until October 2! 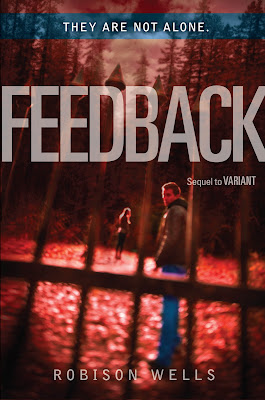