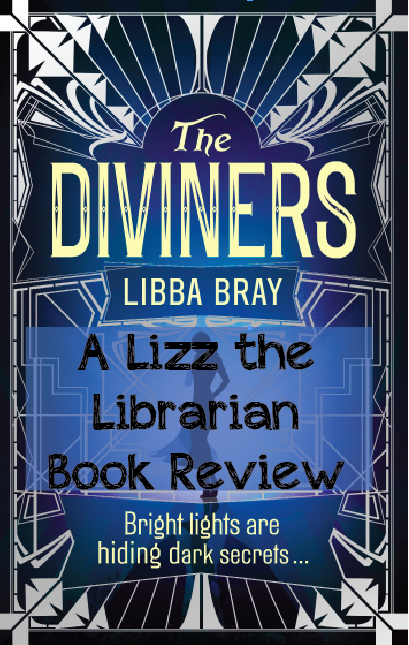 No historians or librarians were harmed in the making of this book,
but some were badgered extensively with questions
Libba Bray, The Diviners: Author's Note

It was a recommended read by the YA Librarian at my library.

The Good:
First Update:
Totally loving the 1920's language in this book! I'm writing this early into the book and I'm not sure if Evie is a character I'm going to grow to like, or kinda hate.
Second Update (1/2 way through):
Are you ever reading a book that is slow, that you aren't that attached to, but at the same time you don't want to put it down? I'm reading this book and I don't know why I'm enjoying it so much. I considered starting another, faster, read, but I don't want to stop reading this one ... I'll keep you updated.
Third Update (Finished)
If you're thinking that you'll quit reading this book because Evie is lame and spoiled ... don't. If you feel like the plot is moving along SLOWLY, well, you're right, but the ending is brilliant, so keep reading.
The Bad:
if Evie is a little shallow, 2 dimensional, and petty. I mean, that is her character, a simple party girl. However, she is dull. The book makes her feel all deep because of this power she doesn't like to talk about, but I'm having a hard time caring about her. I'm only 100 pages in ... I'll keep you updated.

Wait, update, ignore my previous comment. I'm leaving it there because I think it is an important point about how the reader may feel through the first half of the book.
The Ugly:
Wowza, that is a slow moving book and the characters ... so many characters. You can't gloss over any of them though, because they might pop up later as being super important. I'm still not sure I like Evie and I really wanted to like Memphis, but his storyline was always just lacking my interest. I'll be honest, I skipped chunks of the book, several chapters at a time and then would read one to make sure the story was still making sense. I'm sure I missed what makes Memphis sparkle that way, but I wanted to finish the story. I feel badly for an author when I skip parts of their story, they wrote those words and they are important ... but I was impatient and, I suppose, there is no wrong way to read a book. (Except the people who read the last chapter first ... that is the wrong way.)
Who will love this book?
If you're interested in magic, like real, creepy, magic (or are a fan of shows like Supernatural). If you like Epic Stories that are detailed and beautiful, well-woven ... but long, complex, and slow. If you like books with lots of well-drawn characters and with chapters that flip between characters ... you'll like this book.
How much did I like it? 8/10 ... even being slow moving, I couldn't quit reading it.
Will I read more? Probably not, this one had a pretty tidy ending.

Email ThisBlogThis!Share to TwitterShare to FacebookShare to Pinterest
Labels: 8/10, Libba Bray, The Diviners