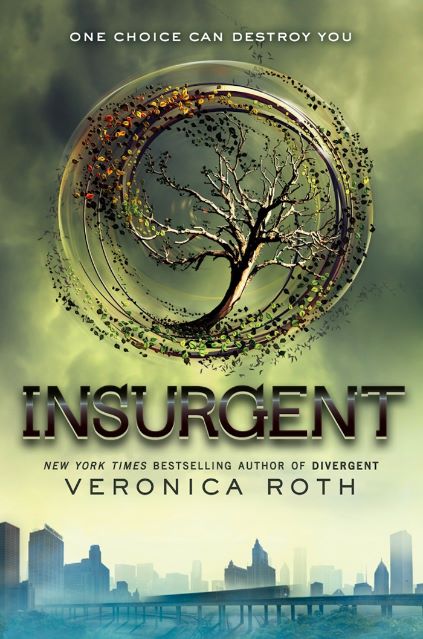 GUESS WHAT I STARTED?!?!?! I guess it isn't that much of a guessing game since I've already told you ... but I am SO excited!!

Review after the jump ... if you haven't read the first book (Divergent - review here) this will contain some basic spoilers you might want to avoid!

So since I was kinda having a sick day today (why are people so nice and share every illness under the sun with me? I seriously need some vitamins!), I had plenty of time to do laundry and start a new book!! I was so excited when this one came in and I had (accidentally) forgotten about it while I was moving. Since I decided I couldn't check anything else out until I finished what I had at home ... I grabbed this one when I saw it!

Here is another great sequel that starts right where the other book ended. However, I could have used a second of review because there was a member of their party I don't remember being there. Nevertheless, the book has started well! I'm so glad that Tris' brother is with her right now! Four/Tobias is as fabulous as I remember him and they are all in a heap of trouble, although I don't "feel" like they are. I think it is because we left off in the middle of the action and it will take a second to get back into it. But, as always, I'll let you know how it goes!

I know, no excuses on the delay here. This book just isn't quite as captivating as the first. There is, of course, a complicated plot line and no one seems to know who they should be trusting - everyone seems so suspicious. The walls of communication seem to crumble around Tris and Four/Tobias. Although they seem to have just revealed huge secrets, why they hadn't told each other before is something that isn't quite clear. Plus, I would have liked to have seen some anger toward each other. That might be coming, so I'll wait. Right now the plot is just kinda dredging along and, although things are happening, it doesn't seem like it matters that much to the story. We will see ...

What is it about this book that I just can't seem to get through? I'm finally over half way through, but it is a struggle to sit down and read it. I don't understand why I pick up the first book of a series and devour it in a matter of hours - but I'm not enjoying the second book. Divergent is on my top ten list this year (await the full list!!), but this one ... I'm too impatient and I care more about the characters then the story itself and this book is focused more on the action (I guess that is me answering my question).

Posted by Lizz in Bookland at 9:30 PM