When asked the question, who would you most like to have dinner with out of history, do you ever feel stumped? While looking for the end of the internet today, I stumbled across a series of people who have answered this question in all too typical ways (basics from Abraham Lincoln and Jesus, to Mother Theresa and Elvis). Limiting myself to modern history and trying to pull people together who would have something to talk about, this is what I came up with.
The most interesting dinner party that I'd love to attend. 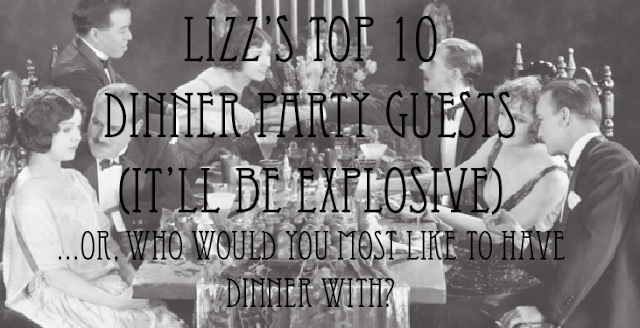 T. S. Eliot
This is a man whose brain I'd like to pick for a few minutes. Plus, I need to do a little gushing since he wrote two of my top five favorite poems ever.

Oscar Wilde
No entertaining party would be complete without Mr. Wilde's antics ... I wonder if he'd be on time?

Marilyn Monroe
Although she was quite the sexpot, I think of Marilyn as a poet and a reader (you have to read this book if you haven't already) and I think that she would love to sit with poets, writers, and adventures - we are kindred spirits in that way.

Nikola Tesla
The inventor himself. I'd love to see what he thinks of all our modern things, plus be able to listen to him as one of the greatest inventors, just talk, tell us stories about misadventures while inventing, and so forth.

Sigmund Freud
I am aware that he would have more than a few thoughts on our other dinner party guests, but the man had a singular mind and I'd be interested on talking to him about how his own life plays out in his theories.

Jane Austen
As a single girl, I think that Jane Austen would find my dinner party cause for a new novel, however I hope we would have the chance to converse about the true romantics that we are.

Amelia Earhart
The girl fears nothing and takes the world by storm. I hope that while we share dinner some of her fearlessness and sense of adventure wears off on me.

Shakespeare
One question: did you write them or not? After he answers it for us we can all go on and have a lovely dinner. He might even spoil us with a tale or two.

Emily Dickenson
Since we would be one of the few dinner parties Emily will have ever graced with her presence, just being there is reason enough for me to invite her. However, I'd love to see through her eyes for a few moments, having her describe what she sees through a window in my house would be the high point of my year.

James Franco
Aside from not wanting to be the only person in the room who has used a cell phone, I think that James Franco is both interesting and educated enough to hold his own at this dinner party. He is quite the modern Renaissance Man who would enjoy most of my guests, I believe.

Posted by Lizz in Bookland at 5:15 PM