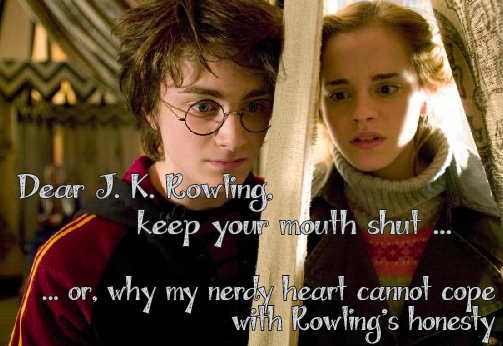 I am a huge fan. Seriously. I've laughed, cried, and lived with the characters in your stories. I want to be friends with Ron, go on an adventure with Harry, and hang out at the library with Hermione (she'd totally make my job awesome, although she would probably want to enforce the "be quiet in the library" rule that I don't care so much for). Snape is my favorite character, I want to be under the tutelage of Professor McGonigal who is tough but fair, I want to see all the amazing creatures that Hagrid's huge heart loves, and I totally want to go shopping in Hogsmead.

You created a world that I occasionally daydream about living in (and by occasionally, I probably mean daily). I've spent hours on PotterMore just looking for new thoughts, new information about Harry and friends. My favorite wall quote reads, "I solemnly swear I am up to no good" and I think communicating via owl would be awesome. Oh, and I would totally give the name Bellatrix to a child, because it is awesome.

However, all this love for you might be overpowered by the terrible thing you said earlier this week. While reading the series I expected Harry and Hermione to get together. Even when she and Ron started dating. Then, when I began to like Hermione and Ron together, I thought maybe Harry would be alone, which was fine. Maybe Harry is meant to be alone. Maybe everything in life shouldn't be tied up in a pretty little ribbon. Maybe Harry leaves the series as he came in, having saved the world, but not really having a family (arguably, Ron and Hermione are now his family, but still). BUT, you didn't leave it at that. Somehow, a character who I had always ignored because she was a little one dimensional, a little pointless, who I wasn't sure was even important to the story line - it was she, little Ginny Weasley, who became Harry's true love.

Now, I've justified this over the years. Maybe Ginny was just who was available and Harry was tired of being alone. Maybe there wasn't enough room in the hundreds of pages written to talk about why Harry and Ginny fell in love, or ended up together, or were perfect for each other. Maybe no one else saw how Hermione and Harry were perfect for each other because they had been through it all, Hermione knew Harry's pain, she loved him with all his flaws, they brought out the best in each other … maybe no one else saw it. Then I thought maybe that would have made them a power couple and that wasn't how you wanted to end the story. Maybe you just wanted them to all live simple lives and fade off into the sunset. That's fine, I had adjusted.

So, Ms. Rowling, why come forward now and say that you've messed up. Why say that after we have loved and lost these delightful characters whose lives have been immortalized on the page and the silver screen, why now say that Harry and Hermione should have been together? Now is NOT the time. Unless you are planning on offering a heartbreaking rewrite, why say anything? Why not just keep your mouth shut? Why not take these doubts to your grave? AUCK! I'm so confused now. Should I agree that they should be together? Should I push these thoughts out of my mind? Should I ignore everything Potter and just move on (ha, FanGirls never say die).

I don't know what to do with this information. What was your plan? Why say anything? How to I cope as my nerdy little heart is oh so confused?

Events discussed here are in light of a recent interview with Rowling and Emma Watson, read more here
Posted by Lizz in Bookland at 7:25 PM