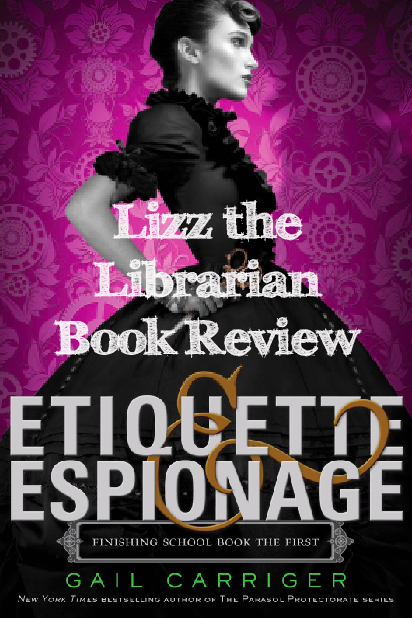 First, let me read you a quote from the back flap of Ms. Carriger's book, "New York Times Bestselling Author GAIL CARRIGER writes to cope with being raised in obscurity by an expatriate Brit and an incurable curmudgeon. She survived her early years by reading most of her local library and memorizing Greek battles." Let me just say, she sounds as exciting one of her characters!!

Whoever said "Don't Judge a Book By Its Cover" had never read any YA fiction - you can tell so much from the covers and this title is no exception. The cover grabbed by attention and the first chapter did the rest.

It would appear that Sophronia is a bit of a disappointment to her mother, so when the opportunity arrises to send her off to finishing school, her mother jumps at the chance with no more than a wave goodbye.

As the title would suggest, this is not simply a finishing school - and Sophronia had no idea what she was in for. Turns out Mademoiselle Geraldine's Finishing Academy for Young Ladies of Quality has some tricks up its sleeve, since it is flying, a werwolf gets them in, and there is a vampire instructor. This isn't even the most complicated thing that Sophronia is having to deal with. There is a prototype that never made it back to the safety of the school (what is it? I have no idea) and there is this crazy group after it and Sophronia, being the awesome adventurer that she is, is determined to find it.

What I love about this book: Sophorina is an awesome character with flaws and personality. She is truly three dimensional. Plus, the awesome school, interesting characters, and the whole steampunk vibe make this a fun and different read (who is getting burnt out on dystopian novels - this girl!).

Who will like this book: Anyone who loves Cassandra Clare will find many similiaries in style and character types - plus if you like Steampunk fiction this is a fun choice.

Will I read more: Yes, both of this series and this author. Her other series sounds quite intriguing as well!
Posted by Lizz in Bookland at 4:23 PM