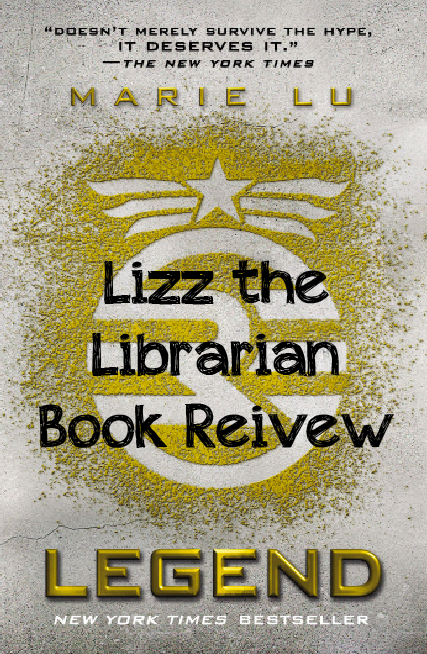 I suppose people have recommended it to me so many times that when I saw it on the shelving cart this week I just picked it up out of curiosity.

Marie Lu knows how to enthrall the reader from the moment a book begins. I thought I'd read a couple chapters in this book before I went to bed and soon it was two hours later and I was half way through. This book has the most compelling characters, who live in a world that is not unlike ours (although, this is dystopian fiction, so there are some obvious differences). I love that there are so many twists and turns with the plot and the characters that the reader is kept on their toes.

I typically don't like when an author switches back and forth between two narrators, but here is seemed to work okay. As long as they weren't sharing the information it wasn't too bad. The ending was almost too predictable for me. And, I would have liked to get to know his brothers better, especially John.

The ending ties up in a pretty predictable package, which I would have rather had it be messier or a little more surprising (since there were so many twists in the book, I expected it to be more surprising). The font color that is used for "Day's" point of view was hard to read late and night when I was trying to finish the book ;)

Who will love this book?

Dystopian fans will enjoy this - if you liked the Hunger Games this is a great read for you. I also think boys will like this one since the main character is male, which is so uncommon.

Will I read more?

Probably not. The ending was pretty neat and there are so many others. But if they make this into a movie, then I'll be forced to read the series :)

Posted by Lizz in Bookland at 5:59 PM