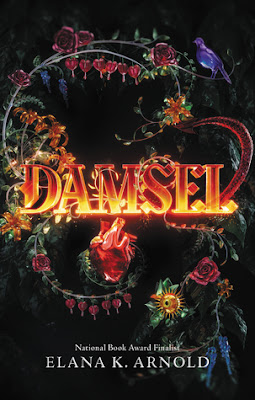 Damsel by Elana K. Arnold
My rating: 1 of 5 stars


Okay, the tone of the book started off like Mother Goose was reading me a story. I felt ... childish. I wasn't sure what to think really - was this a middle grade novel I had mistakenly picked up? But then, all the sexual overtones started coming through and combined with that tone I felt, well, I felt icky. Like I was reading something I shouldn't. Or, at least, reading something I didn't want to read.

Ama wakes up knowing NOTHING. She is the picture of innocence - LITERALLY. And then there is the Prince who is kind of a scumbag honestly. The premise of the book is interesting. What happens after the Damsel is rescued from the dragon. But, why is the Damsel only a shadow of a character? Why isn't she someone BEFORE being rescued? I thought someone told me this was a feminist read - this feels decidedly anti-feminist.

Okay, I know I didn't read very far into the book, so it is probably unfair for me to judge. HOWEVER, there is nothing redeemable about the Prince. He has zero character development other than that he is a mama's boy who forces (did I say forces, yes I guess I did) women to sleep with him. He is acting out of responsibility to rescue the Damsel.

The ick factor just increases with the book the more you read. It is rare for me to feel this strongly about a book, but why isn't there a WARNING on the content.

I so appreciate Girls of Paper and Fire because of the trigger warning. A simple statement like "contains sexual assault and abuses of power" would have had me approaching this book in a very different way. Preparing the reader on subjects like this isn't a spoiler, it is just the right thing to do.

I'm interested to know, for the people who read the whole thing, does this improve? Does the Prince get his just desserts? Does Ame finish victorious? Post your spoilers in reply because I want to know how it ends, I just know I can't read it.