Here are some new YA titles that I'm looking forward to sinking my teeth into ;)
Book titles link back to original book descriptions. 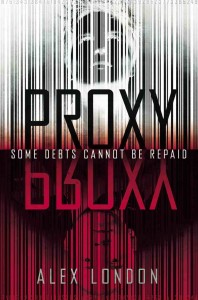 Proxy by Alex London
Knox was born into one of the City’s wealthiest families. A Patron, he has everything a boy could possibly want—the latest tech, the coolest clothes, and a Proxy to take all his punishments. When Knox breaks a vase, Syd is beaten. When Knox plays a practical joke, Syd is forced to haul rocks. And when Knox crashes a car, killing one of his friends, Syd is branded and sentenced to death. Syd is a Proxy. His life is not his own.
Then again, neither is Knox’s. Son to a master manipulator, Knox and Syd have more in common than either would guess. So when Knox and Syd realize that the only way to beat the system is to save each other, they flee. Yet Knox’s father is no ordinary Patron, and Syd is no ordinary Proxy. The ensuing cross-country chase will uncover a secret society of rebels, test both boys’ resolve, and shine a blinding light onto a world of those who owe and those who pay. Some debts, it turns out, cannot be repaid.

Lexicon by Max Barry
At an exclusive school somewhere outside of Arlington, Virginia, students aren’t taught history, geography, or mathematics—at least not in the usual ways. Instead, they are taught to persuade.The very best will graduate as “poets”: adept wielders of language who belong to a nameless organization that is as influential as it is secretive. Whip-smart orphan Emily Ruff is making a living running a three-card Monte game on the streets of San Francisco when she attracts the attention of the organization’s recruiters. Emily becomes the school’s most talented prodigy until she makes a catastrophic mistake: She falls in love. Meanwhile, a seemingly innocent man named Wil Jamieson is brutally ambushed by two strange men in an airport bathroom. It turns out Wil is the key to a secret war between rival factions of poets and is quickly caught in their increasingly deadly crossfire. In order to survive, he must journey to the toxically decimated town of Broken Hill, Australia, to discover who he is and why an entire town was blown off the map. 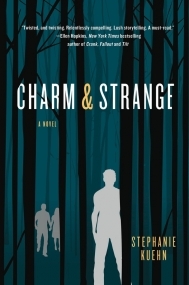 Charm and Strange by Stephanie Kuehn

Sixteen-year-old Winston Winters is awaiting the inevitable.
Stuck at a remote Vermont boarding school in the wake of unimaginable tragedy, Win knows it’s only a matter of time until he transforms into something dark, something wolfish, just like his father. Until he hurts people too. So in order to do the least amount of harm to those around him, he masters the art of shutting others out.
But meeting fellow cross-country runner Jordan Herrera thwarts Win's plans for emotional isolation. A scholarship student with secrets of her own, Jordan’s boldness and wit draw him in. And when she asks Win to accompany her to an all-night party in the deep New England woods, he’s torn. Because he’s not sure they should get any closer. He’s not sure Jordan will be safe with him. But she insists. And he goes.
Win wants to believe he’s not dangerous. That he would never hurt someone he cares for. But as he leads Jordan into the wilderness with his father’s blood running through his veins and wild wolves running through his fragile mind, Win knows this is simply not true… 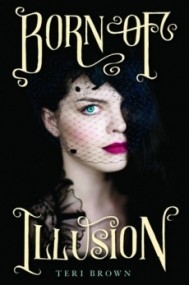 Born of Illusion by Teri Brown

Anna Van Housen is thirteen the first time she breaks her mother out of jail. By sixteen she’s street smart and savvy, assisting her mother, the renowned medium Marguerite Van Housen, in her stage show and séances, and easily navigating the underground world of magicians, mediums and mentalists in 1920’s New York City. Handcuffs and sleight of hand illusions have never been much of a challenge for Anna. The real trick is keeping her true gifts secret from her opportunistic mother, who will stop at nothing to gain her ambition of becoming the most famous medium who ever lived. But when a strange, serious young man moves into the flat downstairs, introducing her to a secret society that studies people with gifts like hers, he threatens to reveal the secrets Anna has fought so hard to keep, forcing her to face the truth about her past. Could the stories her mother has told her really be true? Could she really be the illegitimate daughter of the greatest magician of all?
Born of Illusion is the first book in a new series. Each book in the series will introduce a new historical figure, whose legend is shrouded in magic, along with the young woman whose fate is irrevocably tied to his. The through line in each of the books will be The Ghost Club, the real life secret society that was founded in 1862 by the likes of Charles Dickens, Sir Conan Doyle, and W. B. Yeats to advance mankind’s knowledge of the paranormal. The first three books in the series will deal with Houdini, Aleister Crowley and Rasputin.
Posted by Lizz in Bookland at 8:21 PM