Book Review: The Cure for Dreaming 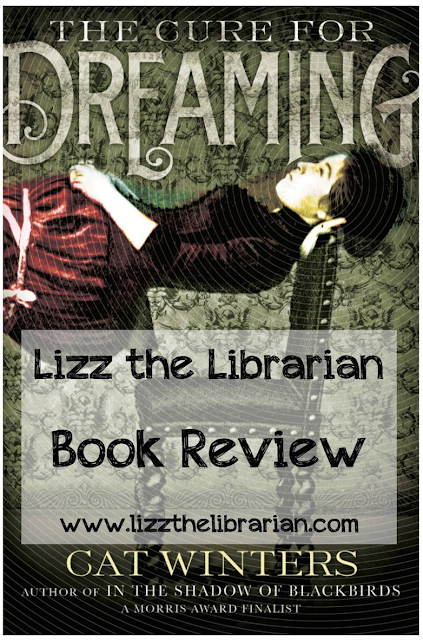 Tweet Synopsis: Being yourself is even harder when you're a budding suffragette, your father is a traditionalist, and there is a hypnotist waiting to erase it all.


Why Did I Pick It Up: I was previewing books for the Summer Reading Program and this awesome event we do called "Sneak Peek." Each summer we hold back a hundred or so new YA books and reveal them all at once while giving book talks and feeding everyone sugar first thing in the morning - it is awesome.

Plus, this book has this fantastic cover that makes you want to read to find out what is going on.

Reminds Me Of: I don't know, I don't read a lot in this genre.

Romance: Yes, a hint
The Good: Olivia Mead is just a girl trying to live her own life. She isn't really a suffragette, but her father's crazy notions are pushing her that direction. She is just a girl with her own thoughts, own mind, and she wants to be great of her own right. She definitely doesn't want to marry and settle down.

Olivia's father is a great "bad guy" - he totally reminds me of Willy Wonka's father in Johnny Depp's Charlie and the Chocolate Factory. He is a dentist, he is a sadist, and he is a traditionalist over all. After pushing Olivia's mother away with his overtly traditional ideals, he is now doing the same to Olivia.

After reading so many fantasy and dystopian novels (which are my favorites) this was a great break from those genres.

The ending is perfect, seriously.

The Bad:
The writing could be tighter. The story is good but not quite great. Henri's story is interesting, but not fascinating. It just feels like a little something is missing, it is just a little short. I felt like the whole part about Henri's backstory and his sister are rushed whereas other parts are unnecessarily drawn out.

The Ugly:
Although I read this book almost straight through, I didn't miss it when it was over. Usually I have a little withdrawal when a book ends, but this one was just right. Most people might think that is a  good thing, but I love to live in a story world and this one just didn't to that for me. That isn't really ugly, it is just a little unpretty.

Who will love this book? Someone who likes a historical story or a strong female character.
How much did I like it?  7/10

Will I read more? Cat Winters said in a Tweet to me that this was a stand alone novel.

Email ThisBlogThis!Share to TwitterShare to FacebookShare to Pinterest
Labels: 7/10, Cat Winters, historical, The Cure For Dreaming