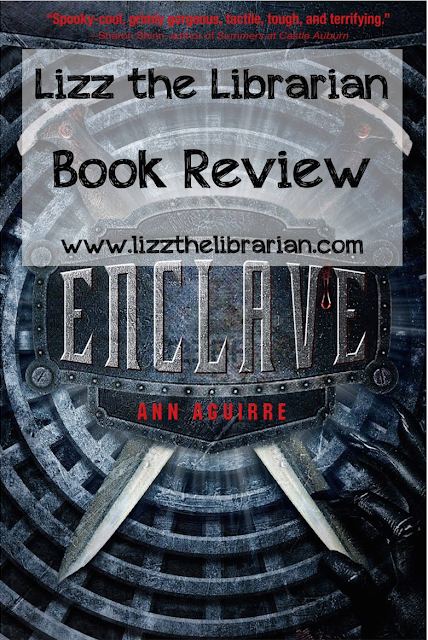 Tweet Synopsis: Deuce isn't a heroine, but she is writing her own story, no matter what anyone thinks.

Why Did I Pick It Up: Recommended by a friend

Reminds Me Of ... City of Ember

Suggested Age Range: 6th and up

Romance: Hinted at, but nothing yet
The Good: Deuce isn't a heroine, she isn't even a great character. No, she is a hot mess. Loyal to the few friends she has, she is all corners and rough edges. She doesn't have a magnetic personality, but she is trying hard. She has spent her whole life training to be a huntress and now that she has arrived, she isn't really hacking it.

I love the details of this world as it is woven together. I felt like I was there - from the naming ceremony to how little they had - everything was really amazing. The tension between Deuce and Fade radiates off the page. So does his loyalty when it counts the most. Although neither one of them want to be paired together  Deuce wouldn't have made it a day without Fade - but she still hates him. That tension makes you read this book quick.

The Bad: Although I probably wouldn't have liked it if I'd been given it - I would like to know more about their world. Maybe I just want it made into a movie - not that I'd like that either (maybe I'm just hard to please).

The Ugly: The second half of this book starts to splinter and I'm less interested than the first half, I can't put my finger on why without giving some major spoilers so I won't, but something happens in the storyline which made me almost put down the book out of boredom. That might contradict my earlier statement that I tore through the book, which I did, I just got a little bored.

Will I read more? Probably not, but it was good