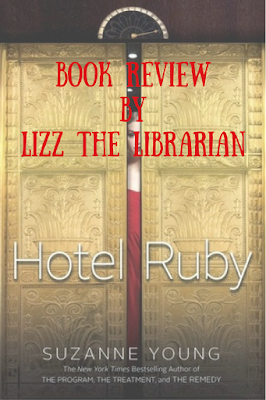 Stay tonight. Stay forever.
When Audrey Casella arrives for an unplanned stay at the grand Hotel Ruby, she’s grateful for the detour. Just months after their mother’s death, Audrey and her brother, Daniel, are on their way to live with their grandmother, dumped on the doorstep of a DNA-matched stranger because their father is drowning in his grief.
Audrey and her family only plan to stay the night, but life in the Ruby can be intoxicating, extending their stay as it provides endless distractions—including handsome guest Elias Lange, who sends Audrey’s pulse racing. However, the hotel proves to be as strange as it is beautiful. Nightly fancy affairs in the ballroom are invitation only, and Audrey seems to be the one guest who doesn’t have an invite. Instead, she joins the hotel staff on the rooftop, catching whispers about the hotel’s dark past.
The more Audrey learns about the new people she’s met, the more her curiosity grows. She’s torn in different directions—the pull of her past with its overwhelming loss, the promise of a future that holds little joy, and an in-between life in a place that is so much more than it seems…
Welcome to the Ruby.

The Good: There was a twist coming. I mean, you knew it was coming. You'd spent the first 60% of the book with a mystery creeping over your shoulder. I liked the little horror, little mystery aspect of this book. I normally don't enjoy either of those genres and I think if they had been fully fleshed out, I wouldn't have enjoyed the book, so I can see why some people were disappointed.

The minor characters in this book were fantastic. Daniel, Lourdes, Catherine were more intriguing than Audrey and Elias. Although, even Elias was more fun to read (although a little two dimensional for the love interest) than Audrey.

The Bad: All that being said, the book was predictable. By the time we got to the big reveal I'd figured it out. Honestly, I don't mind this, I like to be one step ahead of a story (although the ending was surprising for me) and I didn't mind the predictability here. Audrey falls flat as a main character. I'd have liked to have seen the story told from another point of view - it might have been more interesting. I mean, Audrey is numb because of her mother's death, and we get that from her inner-dialogue, but that made her a dull character point-of-view.

The Bitter Truth: is that I spent 60% of the book a little bored, 30% of the book intrigued, and 10% of the book on the edge of my seat. Am I being generous with four stars? Yep, but I really enjoyed the book. I'm not sure I'd recommend it because I wouldn't want to defend it, but I'll stay with my four stars.

Add to your GoodReads here
Posted by Lizz in Bookland at 5:00 PM