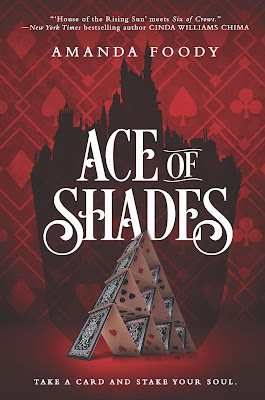 Ace of Shades by Amanda Foody
My rating: 4 of 5 stars

So for the first 75% of this book it was only three stars, but the last 25% was five stars so I had to average them out at a four.

Ace of Shades starts slow. Enne (what kind of name is that, seriously, we've spelled out a letter) arrives in the City of Sin to find her missing mother. Within moments of arrival she's lost her luggage, is on the run from the police, and gets tied up with a street gang.


Although that sounds like an exciting start, it's actually a little frustrating because it felt like I missed a couple early chapters. I love when a book pulls you in during the first few pages, but this one felt more like I was dropped into a story that was already going and I had to figure it out as I went. This is probably due to the little-to-no world building that happened. It might have been a stylistic choice from the author to not give us any history, but I felt lost for so much of the book.

Then, the count down to when a loan needs repayment begins, but I didn't feel that pressure, so the plot seemed to move slowly. There were bursts of excitement and then sections that felt like filler until the next burst of excitement.

It's good, but there's a catch.
I liked the whole bit about Levi being bisexual. That is so uncommon in a YA book and it was handled with such ease that it fit in well with the story instead of making it what the story was about. However, his shyness around Enne seemed so opposite to his casual engagements with everyone else that it felt awkward.

Enne has a LOT of growth throughout the story - which you know I'm all about the characters - but the emotion she feels is always so DRY. I just wanted more juicy emotion from everyone in the book. Give me description, show don't tell.

View all my reviews

Posted by Lizz in Bookland at 3:05 PM