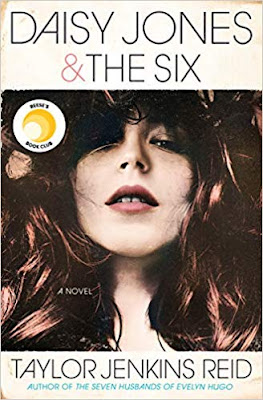 Daisy Jones & The Six by Taylor Jenkins Reid
My rating: 4 of 5 stars

Tragic, gritty, poignant. Still with me days afterwards. It has just that touch of "ick" that makes you shift in your seat a little while reading.


Daisy Jones is a girl tied up in a life she wasn't ready for. Mostly because she is a mere child when she starts going to night clubs and is quickly involved in that seedy world. She dreams of becoming a famous song-writer never seem quite within grasp without being a headliner herself.

Billy Dunne and his brother are members of a garage band that takes off. Quickly renaming themselves to The Six they start to take the world by storm. Billy has a foot in two worlds - the rockstar life and that of father and husband.

However, when these two entities collide, there are sparks ... the kind that cause the world to burn. In a world of sex, drugs, and rock-and-roll Daisy and Billy are often just trying to keep their heads above water.

Told in a cast of voices, the book feels like well-edited "reality television" interview sessions, with each person telling their version of the story to create a well-rounded and believable single narrative.

Because everyone is telling their story from the first person, the story grips you from the start. The characters are so real, the story so believable I actually had to look up and see if Daisy Jones and The Six were real bands. Having just watched Bohemian Rhapsody a few weeks ago, this feels like such a real story. I'm sure it was the reality for so many late 1970's bands.

As someone who doesn't read much reality fiction, my heart was unprepared to feel so badly for these characters. The whole situation felt so real and I just wanted to yell at the characters who should have been watching out for others (ie. what in the world were Daisy's parents doing?).

I think GRITTY is the one word I would use to sum up this book.

I have both the physical book and the audio version. I highly recommend the audio because it is recorded with full cast, making it feel even more like a production.

Posted by Lizz in Bookland at 2:35 PM