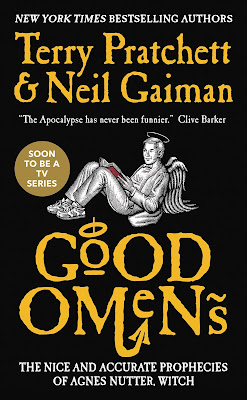 Good Omens: The Nice and Accurate Prophecies of Agnes Nutter, Witch by Terry Pratchett
My rating: 3 of 5 stars

The storyline is brilliant. The whole pebble under the cup game (which they tell you to pay careful attention to) effects the endgame in ways that I totally saw coming, but enjoyed the ride.


But the real problem, the reason this is a three star review, is because the plot moved entirely too slowly for me. Because I already knew what was going to happen (because I deduced it based on Bible knowledge and general assumptions), I just wanted it to GET THERE already. I found myself scanning entire sections which I know effects how much you enjoy a story ... I just couldn't help myself.

I love the whole dynamic of Them (which reminds me of the kids in Stranger Things) and the Crowley/Aziraphale friendship was nicely (I mean that in the modern usage of the word) developed.

I guess I'm a fake fan, but that's okay. Here's to hoping the show isn't a total let down!

Posted by Lizz in Bookland at 7:00 PM