Two things. First, I haven't read a book in over a month. Second, anything Little Red Riding Hood related catches my attention. Wait, three things, third - I really, really, loved Cinder (it was my first review here on Lizz the Librarian!)

I started the story to be slightly disappointed that Cinder wasn't a part of the first chapter or two, but I so quickly loved Scarlet's character that I when Cinder did have a chapter, I found myself impatiently awaiting Scarlet's return.

The character of "Wolf" (the name is totally heavy handed) was charming before we even meet him. Emile's description made me instantly want him to be the love interest of Scarlet. Laughably I was only about twenty pages into the book. However, YA books aren't known for their deep and unpredictable plot lines.

Here is the thing I love about YA fiction - there is this tease that is so much better than the real thing. You know how two characters can spend five pages building up to that perfect moment ... and then it doesn't happen? Well, that is much better than the first kiss, every time!

I was anxious to get off work and home to my book. That is almost a joke, except I'm totally serious. The ending was perfect! The characters, after spending so much time not doing what I wanted them to do, finally came around and made me happy. Meyer has really intrigued me with her fairytale turned dystopian YA novel style and I am so anxious for the last book in this series that I friended the series on Facebook for some more information. Turns out the next book doesn't come out until 2014 and is entitled "Cress". The brief description on GoodReads says that it will be about Cinder and Rapunzel. Um, excuse me? What about Scarlet? What about Wolf? What about the characters I'm REALLY involved with right now????

This isn't the best book trailer, and the guy's voice isn't deep enough for a voice over, but here ya go!

Scarlet: This girl is no nonsense! She isn't going to let anyone push her around. She knows her name is heavy handed because of her red hair and she wears a ratty red hoodie her grandmother gave her. I wish that red hoodie had played into the story a little, but it didn't. Her grandmother is missing and she still continues on with life until a man who is unlike anything else falls into it. I felt that Scarlet went from naive to not so naive really quickly, but since I'm not quite sure about her age, maybe this was a natural progression.

Wolf: I'm fanning myself as I write about him. The man is shy, sweet, strong, and sexy. His animal instincts are pretty much the only thing that can scare Scarlet. Now, before this starts sounding like a Harlequin Romance Novel, let me just say that this book is all about the tease. In 400 and something pages there is a total of three kisses from any character pairing. But Wolf, I wouldn't mind him feeling the need to save me at any point in time. I loved how Meyer was able to balance the animal instincts with his innate tenderness. He was sweet and terrifying all at the same time.

Cinder: The girl is back and she is not going to let anyone keep her down. After escaping from prison (obviously she wasn't going to spend the whole book in a prison cell) she goes on a hero's mission with a half-pathetic accomplice in tow. I love how human she is, how she is loyal to her friends and wants to maintain her humanity, even though she knows it wasn't ever there to begin with. Although 65% of the book is dedicated to Scarlet and Wolf, Cinder's story moves along seamlessly.

Thorne: First, his name is Thorne, which makes me thing that he has to be Sleeping Beauty's Prince Charming. However, Sleeping Beauty doesn't even have a book announced, so I may be wrong. Well, Cinder stumbles across him while trying to escape prison, interrupting his perusal of inappropriate pictures. Even though he is winey and overly confident (I'm being nice here), he really does help Cinder in ways that she couldn't have done without. One review describes him as her Han Solo and I think that is pretty apt. A girl as strong as Cinder (or Princess Leia) can balance out a guy like this. Unlike Han Solo, Thorne doesn't make a move, leaving our current Cinder/Kai pairing intact.

Kai: This Prince, excuse me, Emperor, is a huge disappointment in this whole story. Doesn't he remember Cinder at all? He barely seems conflicted when ordering her recapture, is disappointed when they can't turn her over to the Lunars, then he seems to just give up on everything he once stood for. He isn't winey like Thorne, he is just pathetic and weak. Even though I loved their story in the first book, I find myself hoping that Cinder falls for Throne instead. 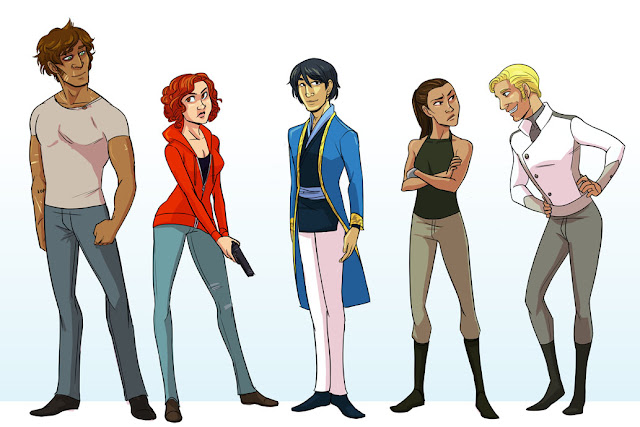 Thorne cracks me up in his picture ... and I imagined Scarlet's hair longer ...

Posted by Lizz in Bookland at 9:29 PM