I've said it before, I'm not a graphic novel fan. However, as the collection developer for the graphic novel section at my library, I'm learning a lot. Additionally, I'm finding some things I really like. 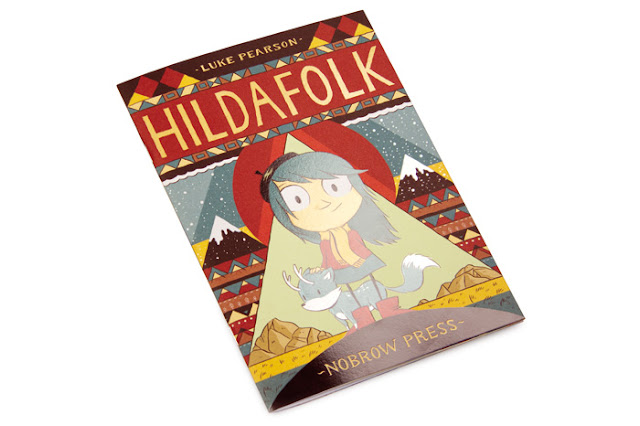 You know how people (um, librarians?) are always saying you can't judge a book by its cover? Well, that should probably be that you "shouldn't" judge a book by its cover, because you totally can - and I do, often!
Hilda was so adorable with her bluish hair that I couldn't pass her up. However, not having done any research I didn't realize that this is book two, book one is Hilda and the Midnight Giant. There is also Hilda and the Bird Parade ... both of which I'll be ordering soon because this is a sweet book.
A mere 12 pages to tell an enchanting story about a girl and her adventures. Well, Pearson pulls it off. Between her desire to be cozy, her adoration of trolls, and the excellent artwork this story is one to read and re-read.
Struggling readers will enjoy the brevity of the story. Graphic art snobs will love Pearson's work, and anyone who likes a folky-fairy tale will be captivated by Hilda and Twig (a trusty sidekick).

The publisher, who I gave some credit to above, hosts the 17x24 project, of which the Hilda series is a part, where up and coming graphic novelists can publish in a cost effective format. See more information on their website. 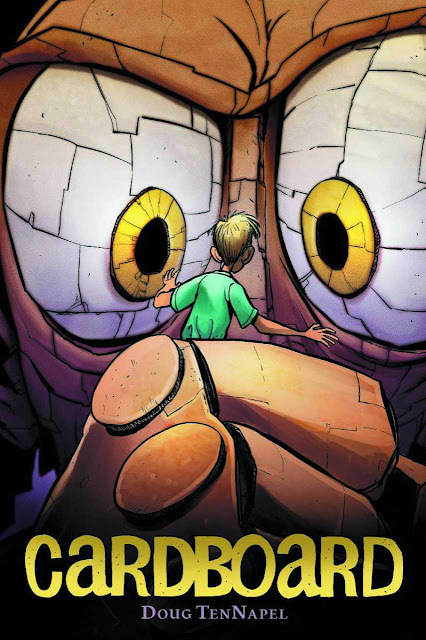 Cardboard was a book I picked up on a whim and decided to read. I had ordered it for the library and it had some great reviews. I decided to see what all the "fuss" was about. Now, this isn't my favorite art style and this adventure story isn't what I typically read. But this was fun and made me see why kids love a graphic novel. I liked figuring part of the story out for myself.
When I'm reading in Story Time, I'm really picky about the kind of picture books I present. I like them to be witty and poignant, but they have to have EXCELLENT illustrations. Not art, not elaborate paintings, but great art! Great art is where part of the story is told in the picture. That is what a graphic novel does and I really saw that here.
The reason graphic novels are perfect for struggling readers is because they help to develop reading skills and interest, but they also promote reading comprehension in ways that I'm not sure teachers always understand.
I loved this story about a father and son and their adventures trying to make life happy for themselves. I'm not the only one, evidentially Tobey Maguire, Chris Wedge, and Fox Animation are interested in the book as well!

The Secret of Stone Frog by David Nytra 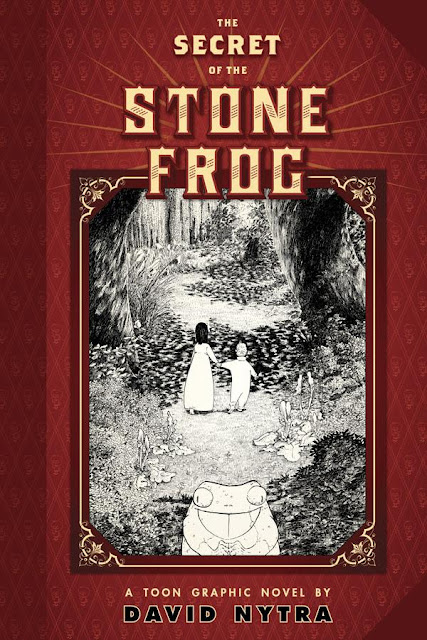 This book is a part of the "Toon Graphic Novel" series and is the reason I ordered it. Well, actually I read two different reviews that said if you liked Alice in Wonderland you'll love this. Seriously? Didn't I already face that disappointment in Coraline? When will I learn that nothing holds a candle to Alice?
Deep breath, vent over.
The illustrations remind me of The Littlest Prince and aren't something I cared for. However, the story captured me within the first few frames ... and then disappointment strikes. This isn't a story for Alice in Wonderland lovers - it is Alice in Wonderland. It is a cheep knock-off. Lost in a new land, strange creatures telling them which way to go, giant flowers, a huge headed evil woman, bee warriors rather than Card soldiers, talking animals, and magical rabbits and silly rhymes ... I could go on.
In the end, I liked the book (didn't see that coming did you). The illustration style wasn't my favorite and the story has so many similarities to Alice that I was surprised it wasn't called Wonderland and the author didn't say Carroll was his favorite. However, the story was sweet and enchanting. Good enough for a second read I think.
Posted by Lizz in Bookland at 12:37 PM