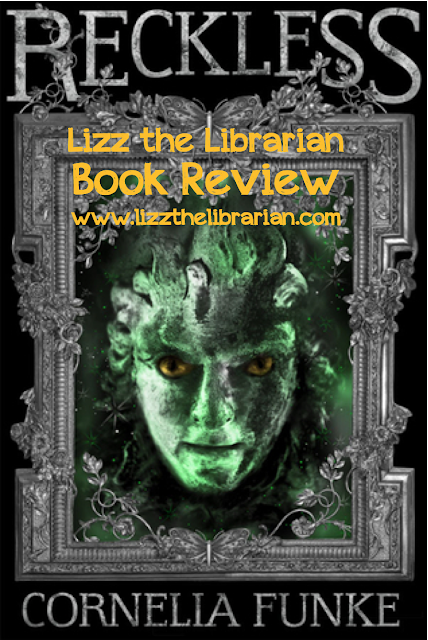 Summary: Jacob Reckless' father disappeared when Jacob was a young boy. But he did not run away from his family, as Jacob discovers, there is a different world that can be accessed through a mirror in his father's office. Jacob begins to live two lives, one within the mirror and one in his own world. However, when his brother steps through the glass and is cursed, it is up to Jacob, his friend Fox, and a cast of creatures to save him and bring him back.

Why did I pick it up: It was available as an eBook ... I'm not always picky, but I'm so glad this was a suggested title in my Overdrive account! To date (okay it's only January 18th, but I've read 8 books already) this is the best book I've read this year.


Genre: Fantasy ... like with fairies and the whole shebang.

Favorite Character: Jacob ... because he has it all figured out. Because Fox loves him and I love her. Because he is dedicated to his brother whom he loves but doesn't always like. Because he is a guy who is kind of a jerk but wants to do the right thing.  And, because of that whole bit with the fairy.

Diversity Represented: Diverse creatures, but all humanoid characters are white ... unless they are green, but you'll just need to read the book.

Romance: lots of TENSION ... some past stuff rehashed via memory ... nothing really tangible. There is a kiss that is more annoying than anything else.

The plot of this story is great. It is quick moving and well planned out. Even if the rest of the book was bad, I would have kept reading just to find out what happened. Excellent pacing.

However, beyond the plot is the development of the story. The world is so detailed, I felt like I understood my surroundings while I read because there was time spent not only explaining what we saw, but there were these little stories that told us why the trees were like that or the legends that created different parts. The world description was lush, I have to compare it to Harry Potter (gasp!) in the way that it really felt real. I have a very concrete visual of the world in my head.

Now, the characters were the best part. They were each individuals, even minor characters were realistic and three-dimensional. Heroes screwed up, villains had nice sides, there wasn't this definite distinction between good vs. bad. Which makes the cast so much more fun to read about and get to know. More than just the variety of characters, was the emotional depth of the characters, the physical descriptions may have even been a little lacking, but I didn't wonder who was who because their actions, quirks, and personalities shown through.

Fox is amazing, although I was confused at the beginning ... is she a girl, is she a fox, am I a reader ... a little clarification in that first introduction would have been great.

I love a good fairy tale book. Reckless doesn't disappoint. One part Alice (hello, travel via mirror) one part Oz, three parts magical legends and then Funke's imagination that takes over. This book is just so good.

The ending was tidy, but I was so drawn into these characters that I immediately started book 2. So even with a neat little bow at the end, I NEEDED to keep reading.

Okay, it is a little predictable. I said the plot was good, I didn't say it was totally unique. However, the story develops well and isn't formulaic, it is just easy to see where things are headed.  Because of the uniqueness of the characters and beauty of the world, the occasionally predictable plot line was forgivable.

My library, Barnes and Noble, and just about everywhere I looked had this as a Juvenile novel. Although everyone seems to think this is a book for kids and there isn't anything that is CURRENTLY happening in the story that's really inappropriate,  there are references to previous sexual relationships and some jokes that land this (for me) squarely in the YA section.

If I wanted to be really picky, and I'll go there for the sake of the review, Jacob didn't really grown, change, become a better person in the story. Although his relationship with his brother is better, nothing indicates he is going to make better decisions in the future. For me this makes him all the more interesting, but I do like to see characters mature over time.

The Bitter Truth: This is the best book I've read since the beginning of 2016 (okay, all 18 days ago) and I really look forward to book three (I've already read book two). If you like fairy/fantasy books then you'll enjoy this one.

How much did I like it? Five Stars (no joke, I'm serious, it's fantastic)

Book Bingo 2016: Book with a Male Protagonist
Posted by Lizz in Bookland at 6:57 PM