Obsessing over The Raven Cycle 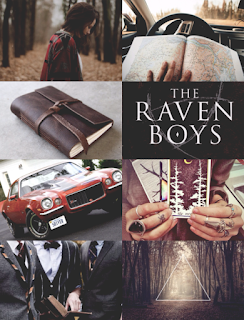 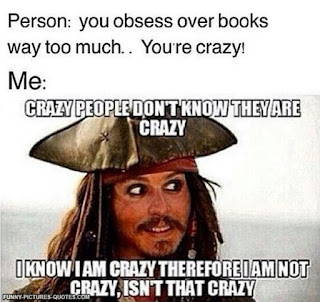 I love Maggie Stiefvater because she wrote these incredible characters: Gansey, Blue, Ronan, Adam, and Noah. Seriously, I've started obsessing over them. Started, let's be honest, it's been going on for awhile. 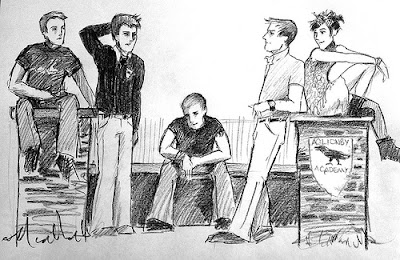 (source)
Wait, in case you aren't as obsessed as me, or (GASP) you haven't read the books yet, here is the one line summary from The Raven Cycle website:Four private school boys, One psychic's daughter. A Welsh legend sleeping under the mountains near a sleepy Virginia town. 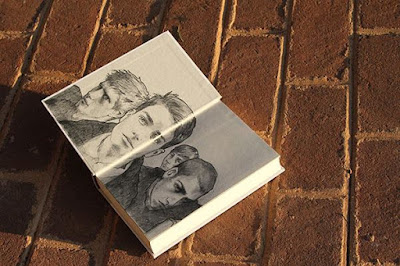 Okay, so that might be what the books are about in the strictest sense of the term, but they are really what the books about ABOUT. They are about the relationships that are formed, the people ... these books have some serious emotional depth.


Read the [SPOILERS]  at your own risk! I would absolutely suggest that you've read the first three books and then you can highlight the sections after the word [SPOILERS] to read my thoughts.

Thoughts on Blue: Blue has been raised in a pretty crazy household of all women, all physics, and they are all pretty eccentric. Growing up in a life like that I'm not surprised that Blue ends up being so practical and pragmatic. She works three part time jobs, has a list of rules, but is still wears things that aren't quite clothes, or at least they might have been before she took her scissors to them. Only someone as matter of fact as Blue could really be holding it all together knowing she can never kiss her true love. Obviously one of her rules is to never fall in love, but we all know how well that is bound to work out for her. I love Blue because of her practicality, but it is her loyalty that makes me want to keep reading her story. Whether it is a funny aunt, their crazy town, or eventually one of the boys, she isn't going to let anything happen to what she cares about. Somehow in the whirlwind of adventure these people are on, Blue is the glue holding it all together (even when it seems like she might be the reason it is all falling apart). Stiefvater describes Blue as, "unfriendly and judgmental" which has caused her to not have friends (source) which is what makes her quick and tight bond with the boys even more interesting.  [Spoilers] But then when she and Gansey "pretend" to kiss that night, I mean, it almost rips your heart out. Blue is holding herself together, but she is wearing thin in this third book, I mean, they all are.

Thoughts on Adam: Honestly, I didn't like Adam until I listened to the books. I had read The Raven Boys twice and the next two books once and I just didn't like him. He seemed like trailer trash and I didn't connect with him. I don't know if it was reading that he is Maggie's favorite or because of the way the narrator did his voice, but Adam really came alive for me this last "read" through. Gainsay might be desperate to find his Welsh King, but Adam is just desperate to have a life. He is a lot like Blue, working and practical, but he is also impractical because he is the dreamer of the big dreams. He is ambitions and is caught up in this adventure, but his heart really lays in his own future and what he will make of it. Adam is a part of the group, but always an outsider because in his heart I don't think he really wants to fit in, because he wants to leave. 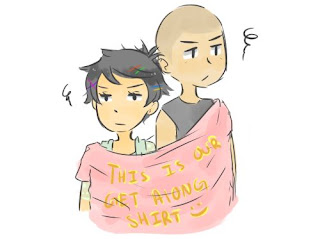 Thoughts on Ronan: Ronan is one of my favorite book characters of all time. He is a character that develops throughout the course of the series. On the surface if you just breezed through the books you would think, 'oh, that's Gansey's asshole friend,' because he is. But he is so much more than that. I had dismissed him during my first read through as just this really jerky character that I didn't care about. But Ronan is complicated, his life is complicated, his family is complicated ... his feelings are complicated. Ronan is special, but doesn't flaunt it. Ronan is dangerous and impulsive, but he is going to do everything he can support their project, he would just rather do it behind the scenes where no one knows that he is helping. [SPOILERS] When I first read that Matthew was a 'dream thing' I just sat in silence. Thinking of it now makes me hurt for Ronan. Here he is, a broken toy, and he knows if anything happens Matthew will die. I think that knowledge is what has kept Ronan alive up to this point. Ronan hates himself for taking risks when he knows that he risks Matthew's life too. Maybe it hurts his street cred too much to be nice.

Thoughts on Noah: Sweet, sensitive, cuddly Noah. The next part contains [SPOILERS], so highlight the text to read my thoughts. I cried when I found out Noah was dead. I cried when I found out it was because Gansey had lived that Noah died. I love how those pieces came together for Noah's story. It is with Noah that we see different sides to everyone's personalities. Blue is tender with Noah, looking out for him and he is able to give Blue a kiss in the sweetest scene ever. Gansey is different with Noah, when they talk he can stop being obsessed with his mission in life and just be a boy who almost died. Noah is the meekest of them, but they have to rely on him to be fearless because he can't die. It is amazing how Noah is the most fearful and weakest of them, and yet he is the one they rely on to keep them alive. 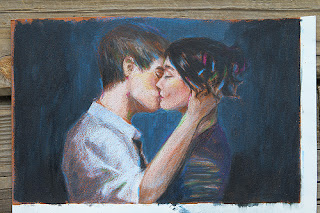 Thoughts on Gansey: This is the hardest one to write. I love Gansey. I don't ship him with Blue, I ship him with teenaged me. Gansey is absolutely my book boyfriend. Gansey is so perfect, yet so flawed, that he just needs to be hugged. You could spend a quiet Sunday afternoon reading in the same room and feel totally at ease. Anyway, Gansey has this amazing magnetic personality that draws people to him - he is calm, polite, and well-spoken which works well with teachers, Blue's mom/aunts, and Ronan to diffuse whatever situation he or his friends have gotten themselves into. He obsesses and it is delightful. [SPOILERS] He forgets to eat (sometimes I think he lives on mint leaves), he doesn't sleep, he writes in notebooks and works on his replica of town and takes midnight drives to investigate an idea. But he isn't just obsessing about Glendower, he is also keeping Ronan in school, and Noah with them, and Adam out of his father's reach, and Blue ... he is just keeping Blue. I love the moments when we see him with Blue, unguarded and without his mask of affluence. I feel like I'm only scratching the surface with these thoughts of Gansey, but there is just so much.

The upcoming book. I can't believe we've waited so long for this book to come. I seriously get anxious when I start to think about it coming out FINALLY on April 26, 2016. I preordered it this last summer.

Here are some thoughts from Maggie about the upcoming book. All of these and SO MUCH MORE can be found on her Tumblr. I highly recommend you check out her page since it feels to Raven Cycle inspired. Lots of fast cars (which Steifvater is a fan of), plus her own art, pictures she is inspired by, and this one photograph that I think could be Gansey in real life.

The Raven Cycle will end on April 26th, 2016. I know readers have a lot of expectations and hopes for the last book, but my expectations and hopes for a project always come first, especially for something like this, something I’ve been working on since I was a teenager. The compass needs to point due north, and that north has got to be my heart. It’s the only thing I have to live with at the end of the day. (source)

Here are some extra Raven Cycle Goodies that you totally need in your life :)

Interested in some snippets that didn't make it into a book? Maggie gives what she calls some boring passages here.

Posted by Lizz in Bookland at 4:55 PM