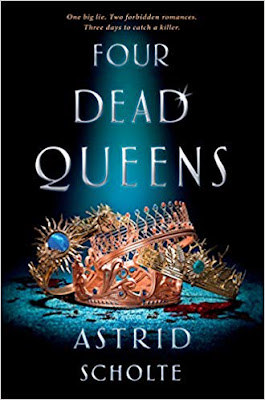 Four Dead Queens by Astrid Scholte
My rating: 5 of 5 stars

Nooooo ... you can't leave me hanging like this. I'm so glad my copy will be at my house in a few short days.

Okay, so here are my initial thoughts on Four Dead Queens, but just on the first five chapters because, that's all I've gotten to read so far (I'm dying here ... the end of five chapters came WAY too fast).

There are two main points of view in this story - that of Keralie and that of the four queens (so really there are five POVs, but that is splitting hairs). Keralie's story already has me so pulled in that I was holding my breath at the end of chapter five.

I'm getting some serious Kaz/Inej vibes from Keralie and Mackiel. They are like a younger version, the version that hasn't quite had as many adventures just yet to have them totally trusting each other. But I feel like they will get there.

I'm not into the story of the queens at all so far. But I've only had two chapters with them, so it's probably too soon to say that I don't care for their part of the storyline.

Alright, so if you liked Six of Crows, or if you like that quick paced fantasy book (okay, that's everyone, can I just say everyone will like this? No, okay fine), then you're going to love this. It's so hard to write a review when I've only had a little sneak at the story, but so far I'm totally sold. I know I'm going to love it, I just don't know where this story is going!

Is it Tuesday yet?

Preview of Four Dead Queens generously provided by NetGalley in exchange for a honest review. They didn't ask me to gush, I just did #sorrynotsorry

Posted by Lizz in Bookland at 1:28 PM