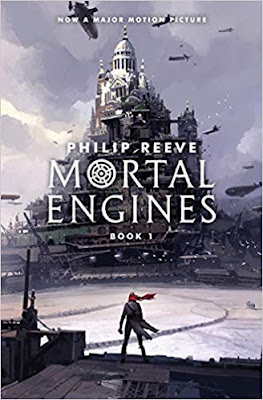 Mortal Engines by Philip Reeve
My rating: 3 of 5 stars

I wanted to read this because the MOVIE looks amazing. And I have a rule. You have to read the book first. So I did.

The premise is intersting - the cities MOVE. Like, they are on wheels and drive around. And eat other cities. Not literally (honestly, I didn't quite get that at first), but rather they overtake them and dismantle them. I'm not entirely sure what happens to the people who lived there. I feel like it was glossed over. Are they killed? Do they become prisoners? I don't get it.


Anywho, we have Tom who I actually liked as a character. He is a little basic in his wants/dreams/desires, but is likable. He is an inner battle with who is the hero and who is the villain. Then there is Hester. Who I really WANT to like. I feel like with just a few more pages of description she could have been a fantastic character. She could have had so much depth, but instead she remained a shallow character with only a HINT of depth. That hint kept me reading.

My biggest confusion is who this book is for. It is classified as Young Adult, but clearly lacks the depth that most YA books have. The plot line is too simple, the emotions too simple, the characters too shallow. However, would it be entirely appropriate for a younger reader? Surly a 5th or 6th grader would have no problem, but the violence wouldn't be appropriate for most younger readers.

Finally, here is the big thing I had a problem with. The thing that made me groan every time ... the word UGLY. The hang up with Hester's looks. If the author found her so hideous, maybe he shouldn't have scarred her so dramatically. Normally I don't make an opinion of the author, but throughout the story I felt like he disliked her. Which is a shame, she's the most interesting character he has.

Posted by Lizz in Bookland at 1:45 PM