City of Bones: A Book Review

I won't even bother writing dates because I re-read this gem in under 24 hours. Why? It is one of my favorites and I had forgotten until we went and saw the movie. Here is how that broke down: saw the movie on Thursday (opening night), re-read the book on Friday, saw the movie again on Saturday (then I went on to read City of Ashes on Sunday and am nearly finished with City of Glass today). 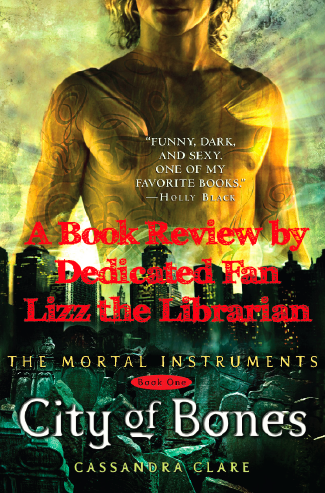 Here we meet a girl named Clary. Clary is strong, independent, with no training on understanding on what is about to happen to her, she survives -- thrives, even! I love that there are these boys around her all of the time, but she never relies on them to come to her rescue. She protects herself in whatever way she can. There are times she is in over her head, but her first thought isn't to run to Jace, it is to protect herself. Clary has thought she was human (or mundane as the case may be) for her whole life, not knowing that there is anything else out there. But when she starts to see what else is going on around her, things that no one else sees, she knows that either she is crazy or there is more to her life than she knew before.

Jace is the first half of what people have labeled a love triangle (there aren't halves of triangles, but go with me here). Honestly, I finished the first book without ever seeing a love triangle. Jace feels like an outsider. His family is gone, he was adopted into another family, and he loves and respects them, but they aren't fulfilling. Jace, with his blonde hair and green eyes, deals with his pain by working hard and pushing everyone away. In a somewhat predictable (but enjoyable none-the-less) way, Clary starts to break down those walls. Not by being endearing and adorable, but by being annoying, dorky, and untalented. He wants to save the world and Clary gives him that opportunity, but she starts to get under his skin. Their relationship is real, like teenagers would behave (although, probably more mature than most 15 year olds in their first relationship).

Simon is the other half. Although, let's be honest, he didn't stand half a chance going up against Jace. Simon is Clary's best friend, that is the only way she sees him. Simon is a nerdy, gamer, musician who has dated and lived a life beyond Clary. Clary is the one whose whole life has been Simon and I love that Cassie Clare didn't make her have unrequited feelings for Simon, because that would have been depressingly predictable. Instead, Clary loves Simon like a brother and Simon is totally in love with Clary. He handles things pretty awesomely after his declaration of love falls on the ears of a girl who doesn't feel the same way.

I'm too close to this story to really tell you anything negative. I can say that if you see the movie before reading the book, giving away the BIG SECRET makes me crazy. It is so much better to read book two without the answers right in front of you. This book is one of my favorite reads because Clary is strong, feisty, and not always perfect. Things fail for her, she lets people down, says the wrong things, and isn't a picture of perfect beauty. However, Clary doesn't expect anyone else to fix these things for her, she figures it out, fights for what she believes in and never gives up. This is also what Jace sees in her - maybe someone so self reliant won't let him down. 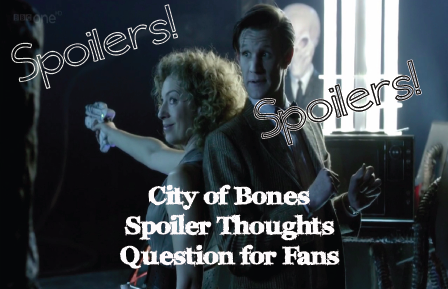 Let me vent for a quick moment about Cassie Clare taking us on this rollar coaster ride of emotion that is the City of Bones. Just when you think that Jace and Clary are in a good place, they are trusting each other and, obviously, there is a lot of chemistry. Then, BOOM! They are related. Not just related, not just the semi-shameful, but still acceptable in some places, cousins type of relation. No, Valentine tells them they are siblings. When I read this for the first time my heart dropped out of my body, my blood boiled, I wanted to scream (I may have, at the book, at the author, at myself for trusting that everything would be okay), I threw the book - but quickly scrambled back to get it because, after all, it had to be a mistake, right? City of Bones breaks my heart in more ways than one, but this is the kicker, the made-me-stay-up-until-3:00am to read City of Ashes in hopes that there would be hope. Now City of Ashes holds my favorite scene, but we will get to that in the next review. Because Clary and Jace (and the cast of characters they associate with) hold my attention and my emotions in their imaginary hands, this was a great twist. Can I say that now, yep, I've read all five books at least once, some twice, and for City of Bones this was my third read through the book. Would I want Clare to rewrite that part and just let them be together? No! Clare has a magical pen somewhere because she always makes it worth the wait.

Question for you - would you rather not have the knife stick in deep with the whole sibling debacle? If you could go back and read City of Bones for the first time, would you want it to continue in any other way?