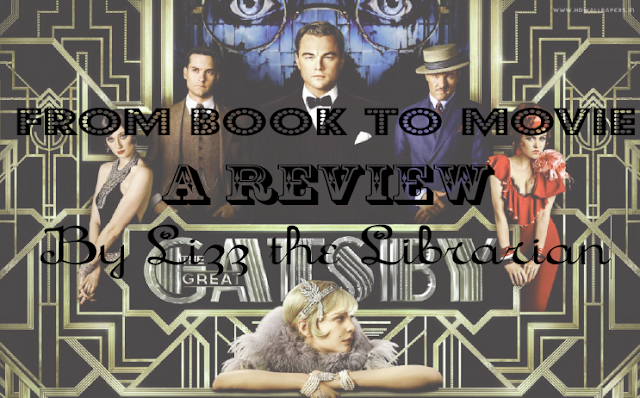 I love to read. I know these days I immerse my mind in YA fiction, the paranormal - angels and demons,  and dystopian fiction - but throughout the years I've love many different sorts of books from classics, to children's lit, to non-fiction. In high school I planned on reading every book on a list like "100 Greatest Novels of All Time" and that was my first meeting with Mr. Gatsby, Daisy, and the gang. In college it was recommended by a group of friends and cited as their "favorite novel ever!", recently colleagues were excitedly chatting about it before the movie came out. Three different attempts, three times failed. Gatsby and I aren't destined to be together.

However, tonight I watched the movie. In part because I love watching who Leonardo DiCaprio becomes on the screen, in part because "everyone" had seen it, and in part because the trailers looked so enchanting. And the music! What a brilliant pairing of modern music with the period ... everything else.

There were parts that dragged, twice that I checked to see how much was left, once that I got up to let the dogs out without pausing, but never did I dislike Gatsby himself. Daisy was sweet and charming. Tom was well cast, I feel (he had a delightful Rhett Butler feel to him). Nick, however, Mr. Nick Carraway was the thorn in my side. At first it was, I thought, because Tobey Maguire is not my favorite actor. I just see him as the silly representative that was stuck in a Spiderman costume a couple times. However, it was more than that, Carraway represents what I don't like about The Great Gatsby -- the narrator's voice. Does he love his cousin? Is he in love with his cousin? Why is he so obsessed with Gatsby? Oh, right, is he in love with Gatsby? I feel he is unreliable, untrustworthy, and we know nothing about him.

I want Gatsby to win the girl and live happily ever after, but why does Nick help him? What was in it for him? What were his moral responses? Ugh, if I could sit down and talk to Mr. Fitzgerald I'd give him a piece of my mind. Why choose Carraway? Why not make Carraway more interesting so he as narrator wasn't so painful?

When Gatsby pulls down a book with all Daisy's letters and newspaper clippings in it my heart was stilled. When he tells Nick that she has to tell Tom she's never loved him, those words, that phrase, my heart was broken. When he looked at Daisy over lunch that day -- my heart was stollen away. Do those things happen in the book? Don't know, I never got that far. But watching Jay die because he wanted to protect Daisy (and watching Leo with an unbeating heart in the water ... again), I cried.

Will I go back and read the book? Nope, three tries is my limit. Will I hold Gatsby in my heart. Yes, forever more.
Posted by Lizz in Bookland at 9:53 PM

Email ThisBlogThis!Share to TwitterShare to FacebookShare to Pinterest
Labels: books to movies, The Great Gatsby