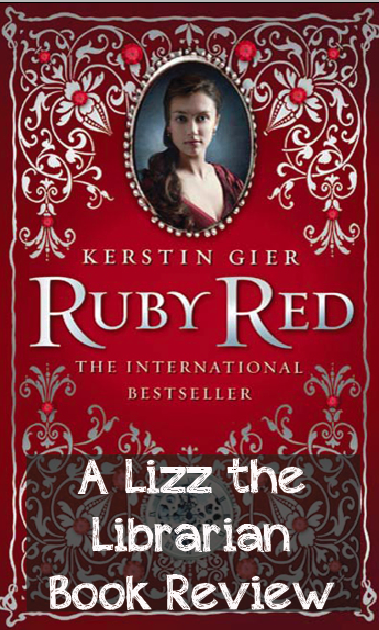 Tweet Synopsis: Gwen wasn't supposed to inherit the time traveling gene, but it makes for a great story #gideonisdreamy #havetoreadthenextone

I read the first 60% of the book in one sitting without even realizing several hours had passed. The rest went quickly this afternoon. Why did I read it this quick? The book is just readable - it is quick paced, action driven, with fun characters and and a pretty unique storyline.

Although I probably criticized Flutter for the same things, I liked the simplicity of Gideon and Gwen's relationship. Not that they are in a relationship, but they just act the way I would expect them to. It didn't work in Flutter, it does here.

Watch out for the Epilogue ... that's all I'll say.

I felt like this book was only the introduction chapter to a greater work. This is a trilogy and I know the story will be continued, but I felt like not that much was really accomplished. I could also argue that the book glosses over what could be important plot lines, but since it was translated from the original German, I'll give it a little grace there. I'd really like more of an ending - however, this feels like it is just a chapter break and the next book will start like another chapter. That's fine, I guess I really just wish I had the second book here at home and that the library wasn't closed tomorrow (I do have a key, but ...)

The Ugly:
Okay, if I was going to get picky (which I totally didn't as a reader) I guess I want more character development. I'm usually dissatisfied in one aspect (slow plot) or another (no character development), so it is probably just me. But there are quite a few secondary characters in this book that we don't really know. There is a guide in the back, but that wasn't as helpful during the story.

Plus, what about the ghosts? Why doesn't anyone seem concerned about it? Why isn't anyone asking questions. Come on people, this isn't normal.


Who will love this book?
If you like Cassandra Clare or Leigh Bardugo you'll like this quick, fun read.
How much did I like it? 8/10Will I read more? Yep, as soon as the library opens again ...
Bingo: 2015: Set in another country
Posted by Lizz in Bookland at 10:37 PM