Book Review: The Girl Who Circumnavigated Fairyland in a Ship of Her Own Making 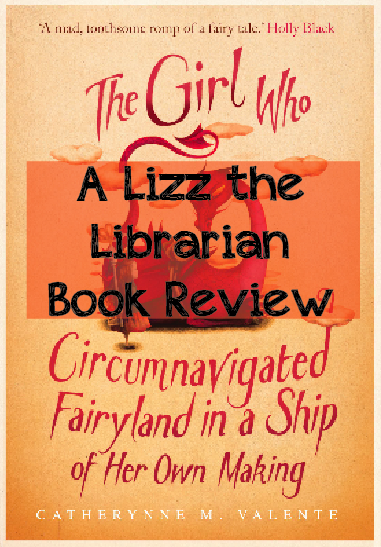 
Why Did I Pick It Up: It's been on my to read list since it came out with rave reviews. I've checked it out no fewer than four times and never got to it before I felt guilty that I'd had it so long. This time I was determined to read it and keep going.
The Good: This book combines so many of my favorite stories and genres it is almost overwhelming. There are these definite hints toward Alice, Peter, and Oz, not to mention a modernized blend of Grimm and Lang. The book reads like a fairy tale, which everyone says, but it is true. Original fairy tales are rare anymore and this one is definitely one for the bookshelves.

September is a great character, she is brave, but unsure, and we feel all of that. There is good emotional development between September and everything around her. I could have learned more about her, but character development isn't a big stressor in a children's novel.

Fairy Land is a magical place, and I don't mean that as a cliche. It is build and described, I feel like I could picture it in my mind. I could map out their journey. I've explored Fairy Land with all five senses and, since I didn't eat anything, I was able to survive and come out the other side. Really magical.

I think my favorite description scene is with Lye and the bathhouse. Incredible visuals and depth to the scene.

Thoughts from early on:
Wow, let me just say I'm a mere 50 pages into this book and the complexity is killing me. It isn't the storyline, it is really a mix of a couple of tales from the Blue Fairy Book, with a dash of Grimm, all set in a strange Wonderland. No, it is the language and sentence structure. Are we sure this book is written for children? There are 4-5 words in every chapter that I don't even know ... I mean, I can assume what they mean from the context, but I don't know how to pronounce them.

Do we really expect children to read these books? Are children reading these books? I would think they'd be great read-alouds to older elementary kids, but you'd have to be really prepared with great pronunciation skills, be a master linguist, or not be embarrassed to make things up. However, you're probably preparing your children for Harvard by reading these aloud and peppering their lexicon with ten-dollar words.

Thoughts after I finished:
This gets better as time goes on. I don't know if as a reader I got used to the crazy big/rare words and complexity of the structure, or if it fades after a little time. However, by the middle of the book I wasn't even noticing those things anymore. In the end the idea of who is interested in this book is still valid. I don't know who to recommend this book for.

The Ugly:
I really struggled to finish this book. It wasn't that it was boring or that I wasn't interested, because I really did enjoy the story, but it was still a struggle. Part of this has to do with the fact that it moves slowly. Every moment of every day is described. This is a choice the author made, I don't like it. There were so many characters with such unique names. It isn't that I couldn't keep them separate in my mind, but more that I never felt like I really got to "know" the characters because we were always moving on. I was almost relieved when I finished the book. I was staring to avoid reading by watching more television and, hello people, television rots your brain :)


Who will love this book?
Young, strong readers who love fantasy will like this, cult lovers of Coreline will like this book. Lovers of fairy tales, especially classic fantasy (Alice, Peter) and magical tales (Grimm and Lang) will enjoy this book. Moms looking for a fun read-aloud could really enjoy this, if they have the vocal skills to represent the book.
How much did I like it?  7.5/10
Will I read more? Probably not