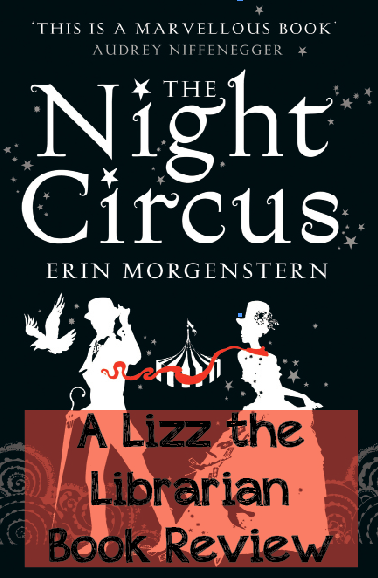 Let me just begin by saying, I don't typically love books like this. I like books with great characters and quick moving plots. This book has great characters, intricately woven scenes, all of your senses are thrilled in this story ... but the plot moves slow. This isn't a reason to dislike the book, for every person who doesn't like the beautiful imagery and sluggish plot, there are four more who loved it and want more. However, if you pick this book up and read it just because I suggested it and you like other books I read, you might be disappointed. That doesn't mean you shouldn't read it - just be forewarned.

Tweet Synopsis: The circus doesn't open until dusk - but this magical place is just a setting for a competition that no one really knows about #magical #enchanting


Why Did I Pick It Up: This is a re-read, but I originally picked it up because there was so much buzz about it. Even without all of that, the cover would have been enough to draw me in. I love the circus.
The Good:

There is a density in the description that wraps you up like a favorite warm quilt and lulls you into the world of the les Cirque des Reves. The two main characters written so well that you feel like you know them, like you've met them at a party. So many books gloss over secondary characters as mere props in the story, but not in Ms. Morgenstern's masterpiece, here the secondary characters are almost protagonists in their own plot lines. So richly written that you want to read whole stories all about them.

My favorite part of these books are the one page 2nd person pages that crop up every few chapters. They say things like, "as you walk through the circus ..." or "the whole place smells of buttery popcorn as you slip into the next tent." It makes a world that you are longing to be real come alive. During one of my many re-readings of this book, I read those pages straight through. I could close my eyes and see the circus. It really is a circus of dreams.

The writing is dense, I know I said that as a part of the good, but it is easy to become weighted down or, heaven forbid, skip a few sentences ... paragraphs ... gloss over pages or chapters. However, if you do this (I was a partial victim of this during my first reading of the book) you start to lose track of the plot. There are so many little details that you might miss if you don't read carefully. At least half of the bad reviews I've read have suggested that the reader had no idea what happened in the end ... I suspect they glossed over the heavily detailed parts. Learn from their mistakes and read the whole book :)

The Ugly:
I feel like the most terrible part of this book is that there isn't a second book ... and that Ms Morgenstern isn't making a big effort to make a second book. And that the movie rights were sold and that means they will probably make a terrible movie that they cast Robert Pattinson in. Oh sigh. The other big part of the book that makes me really crazy is that I want need to know what happens after that last chapter. Le sigh.


Who will love this book?
Oh, lovers of magic and the circus. People who like Narnia. It's a harder read than Water for Elephants, but if you liked that then you will like this as well. Oh, just read it. Just try it.
How much did I like it? 9.5/10
Will I read more? I hope so, Erin, will you please write another?

Posted by Lizz in Bookland at 9:17 PM