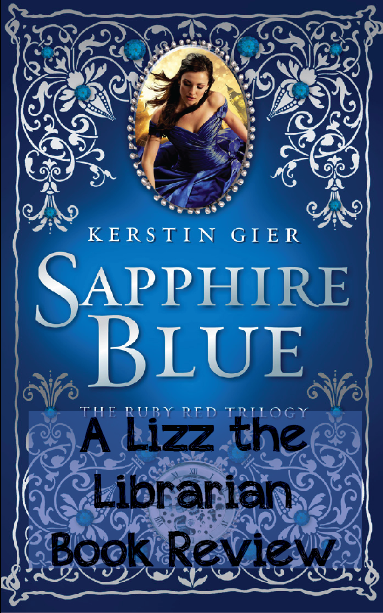 
Why Did I Pick It Up: Book #2 in the Ruby Red Trilogy. After reading Ruby Red I had to read Sapphire Blue.

The Good: This book picks up right where Ruby Red stops, Gwen has no idea what she is doing and everyone looks on in distain. I love this unique story and it is appealing to my love of historic novels (at least, I loved them as a teen).

Gwen figures it out, but she makes a mess of it in the mean time. I love that. This is a lead character who can't quite make it work out. Even though the storyline is Fantasy, the situations are very realistic, believable. The dialog is fantastic (I even catch myself re-reading phrases aloud).

I just finished the second novel and a mere week has passed. This reads like a beginner's novel, where they haven't yet learned to tighten their writing and make concise. This might have something to do with the translation and maybe the style of German novels is different. However, if we are spending books describing the events of a single week, one would think readers would know the character so well and the emotional depth of the story would be oceans deep. It isn't. Sadly.

In addition, the first several chapters are spent recapping the previous book, reintroducing all of the characters and going over the events. In fact, a reader could pick up this book and know what was going on - you wouldn't really miss anything.

The Ugly:
This book struggles with the same issues as the first, there is no clear direction and the reader is taken on many different flights of fancy. Sometimes Gwen's voice is silly and she is talking directly to the reader, most of the time she isn't. One time she even stopped herself from saying something to the reader ... this was awkward because it was 3/4 of the way through the second book and there had never been anything previous to make me think she is an unreliable narrator. I feel like the author is trying to create this emotional response to the book, but she is missing the mark.


Who will love this book?
If you read the first one, obviously you'll need to read this one.
How much did I like it?  7/10
Will I read more? Yes, although this one landed in a much more "ending" type spot, I'll read the third one to get the "full story."

Posted by Lizz in Bookland at 6:34 PM