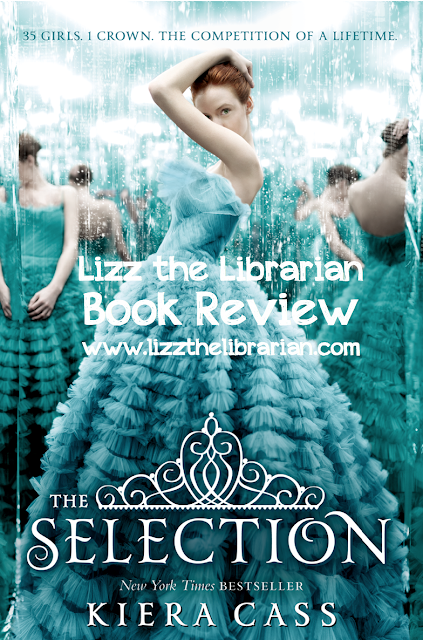 Why did I pick it up: Everyone's read it and I felt like I wanted to read it too ... I should have looked at how my friends reviewed it before spending my afternoon with this particular novel.

Summary: America (yes, her actual name) is a five, which means she and her family are musicians in this dystopian novel that takes place after the USA has fought a war with China for their freedom. She is in love with Aspen, a six, lower on the food chain and whom her mother will NEVER agree to let her marry. However, before she can make too many future plans, America is selected with 34 other girls to compete, Bachelor style, for the crown Prince's hand in marriage. Life at the palace isn't all pretty dresses and good food as America soon discovers ... and the Prince is more charming than America anticipated.

Diversity Represented: I don't think so, but I could have glossed over someone.

Romance: Yes, in fact I almost said the genre was romance.

The Good: Cass does a great job in the character development area. The characters are 3D, well-described and well-rounded. America is flawed and interesting, she is torn and although her inner-dialouge is occasionally immature, she is interesting.

Aspen, let me be honest, I don't like him. However, he is also an interesting character. He is low-born and a hard worker. He seems to really care for America, but I don't feel like I trust his actions. He is a little too pretty, totally knows it, and thinks he is smarter than America and, thus, should get to make decisions or her.
via GIPHY

Maxon is charming and very Princely. He is flustered with the whole Bachelorette contest, but his focus seems to be divided evenly between the girls and his actual job. He is concerned for the people and concerned for the girls. He is a nice guy.

The girls ... some of the girls are hilarious. I don't know if they are purposefully funny, or if they are are funny to me because they are kinda a joke, but still, they add a little life to the "women's salon" scenes.
via GIPHY

The world is well developed, we have good history and I understand where we are. There isn't an over-indulgent description of the world and how we went from being America the Great to this giant steaming mess of ... anyway, I like the amount of world developing. It is a part of the story, only it seems to be the point of the story. This makes me ask, where is the plot? Where is the story part of the story?

The storyline is fun, although not unique by any means, but entertaining and quick paced.

The Bad: Well, it is quick paced because there is almost no plot. In fact, what little plot there is doesn't even finish in this book. The plot doesn't have an arch, it doesn't have tension ... well, there is some tension, but it feels false.

My super friend and reading buddy said the following about this book ...

Exactly, where is the protaging America? She seems to be more of a wait and see what happens to me kind of girl ... that isn't all that interesting to read about.

In addition to the lack of plot, there is the problem with, let's say maturity. We are hanging out with characters that are in their upper teens but act like they are thirteen. Their emotions are only skin deep and all of the secondary characters are really one dimensional. Although this is often the case in books, because the mains are so well developed, this lack of development for the other characters is really glaring.

The Bitter Truth: For a younger audience, this is a fun dystopian romance. It would be especially good for that in-between group: the kids who want to read YA books, but are still a little on the young side. Otherwise, this book with leave you a little empty inside because this story has no story. Just ask, "huh?"
via GIPHY

There is this pure divide on Goodreads between loves and hates. Most of my friends rated it one or two stars, the four/five star are our young fangirls. That's okay, there are books for everyone, and the younger YA audience needs more books.
via GIPHY

Book Bingo: A Dystopian Novel
Posted by Lizz in Bookland at 10:06 PM