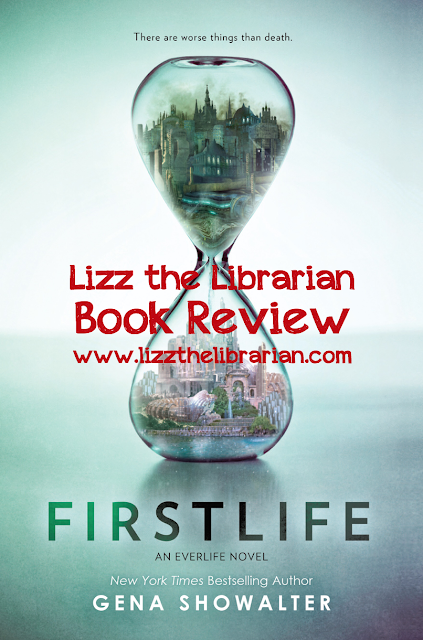 Why Did I Pick It Up: This book was already on my TBR shelf ... but, I was given this book by Netgalley in exchange for an unbiased review. These opinions are all my own.
Summary: Tenley is in her Firstlife and has been sent to an prison by her parents in the hopes that she can be forced into signing with their side, Myriad instead of the more docile Troika. Signing with Myriad means that her parents will maintain their wealth and fame. Enter two boys, Archer who wants her to sign with Troika and Killian who is convinced he will be able to sign Ten with his bad-boy charm, violent outbursts, and devilish good looks. The two sides want Ten so much, they are willing to go to war ... maybe even kill her to avoid the other side winning.

My favorite quote from my notes: "Killian reminds me of Lucifer."
Genre: Dystopian Fantasy Favorite Character: Archer Suggested Age Range: 9 grade + (there is some definite raunchy humor in this book). Lots of swearing, etc. But also a lot of pretty on point slang (which might make this feel dated quickly).

Diversity Represented: a little, in minor characters Romance: Yes ... but not really a love-triangle (just FYI if you try to avoid those) The Good: The character development in this story I really enjoyed. I've seen a couple of reviews that have ripped on the characters and I love the way they change throughout the book. They are big drastic changes, but more realistic ones. Tenley is a pleasantly real character. She is flawed up the wazoo (seriously girl, just CHOOSE) and delightfully sarcastic. She has biting wit and is pretty fearless most of the time. I love that her only non-confident moments are the romantic ones. That was real for me and I loved it.

"Common sense and I are currently bitter enemies." - Tenley

The boys are simply light and dark versions of the same guy, which I also loved. I won't go into this because I want to avoid spoilers, but these boys are delightful.

The secondary characters are real, the villains are hated, and the relationships with parents are complicated. It is a great book for character development.

Okay, enough obsessing about the characters because that isn't even what works best in this book - the action takes the cake! There is barely a dull moment (making this a tough book to put down) and it is fairly violent and intense. Books that are super action packed really benefit from a first person narrator (which I'm growing more accustomed to because it seems to be the trend).

Solan has the best lines ... but I can't post them without being spoilery.

Plus, "Zero" as a swear word is pretty awesome.

The Bad: The email sections don't work - who is in charge? None of these people sound like adults, but more like winey teenagers.

Wowza the dialogue in this story. It overwhelms the whole book and leaves very little room for world development. Is this book fantasy or dystopia? I can't tell. What was the past like? What do people do for jobs? What do the houses look like? Does it resemble Earth? I have so many questions about the setting and the Firstlife vs. Everlife. I think this would have been improved with more natural description and a little less reliance on dialogue. I felt like we only figured things out as they came up and even at that point they were awkwardly introduced to the story. It is like "seat of your pants" world developing.

Show, don't tell "He [Archer] is the saint to Killian's sinner." OBVIOUSLY, but thanks for beating me over the head with it.


Numbering is tired and didn't add to the story ... AT ALL. I found it distracting and like they were trying too hard to make Ten interesting. She is totally interesting. But the numbering plus the poetry was too much for me. The poetry was awesome, case in point:

You suck in so many ways
But at least our association pays
You kept us warm and
Away from the storm
And you've got really a nice form
But you're a major pain in the ass
And that's not just sass
It's a bitch-slap of truth from a sweet little lass
The Bitter Truth: Although dystopian novels and "you-have-to-choose-what-society-you'll-live-in" type books are a little overdone, this idea of Firstlife and Everlife is a nice twist on a kind of tired theme. I really enjoyed this book and I'm looking forward to the next one. However, if you didn't like Red Queen because of the lack of world developing, you might not like this one either because it is a little weak. If you're willing to go with it and let the character development and action drive the story, you'll be just fine.