Book Review: The Problem With Forever by Jennifer Armentrout 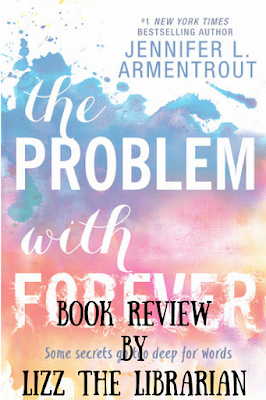 For some people, silence is a weapon. For Mallory “Mouse” Dodge, it’s a shield. Growing up, she learned that the best way to survive was to say nothing. And even though it’s been four years since her nightmare ended, she’s beginning to worry that the fear that holds her back will last a lifetime.
Now, after years of homeschooling with loving adoptive parents, Mallory must face a new milestone—spending her senior year at public high school. But of all the terrifying and exhilarating scenarios she’s imagined, there’s one she never dreamed of—that she’d run into Rider Stark, the friend and protector she hasn’t seen since childhood, on her very first day.
It doesn’t take long for Mallory to realize that the connection she shared with Rider never really faded. Yet the deeper their bond grows, the more it becomes apparent that she’s not the only one grappling with the lingering scars from the past. And as she watches Rider’s life spiral out of control, Mallory faces a choice between staying silent and speaking out—for the people she loves, the life she wants, and the truths that need to be heard.

Diversity Represented: Many of the characters are hispanic, and in ways I found refreshing (Mallory's adoptive parents are hispanic and doctors, for example).

Romance: Yep, which is what Armentrout is good at.

I'm shipping: Um ... Mallory and Rider from the beginning (although Mallory and Hector would also have been interesting)

The Good: Aremntrout knows how to write a YA romance story. I enjoyed her other series (Onyx, Obsidian, etc.) and those had the fantasy/magic element that I usually read in YA. This was a change of pace for me being just modern day teenage stuff. Anyway. Mallory and Rider were in an awful foster home and meet up four years after they both got out. However, for the past four years they have lead two very different lives. This is a squishy, feel good romance story and as such, I love how Rider is that protective big-brother but something more character. I mean, if you're going to read a romance, let it be one with your favorite leading man qualities.
Beyond the squishiness, Mallory is actually a pretty awesome character. She really grows throughout the story and becomes more of her own person. The story is a romance, but so much of the plot is based on her being able to handle life as her own person. There are no Bella moments here, Rider might act like a jerk, but I think in those moments Mallory is actually stronger despite her past and everything she struggles with.

The Bad: I feel like more time needed to be spent making the past worse. I know, in real life their past would be horrific and I'd never wish that on any real person. However, these are book characters and their bad lives were just bad, not terrible. Not I'm never talking to anyone terrible. Again, if these were real people I wouldn't be saying this, I just struggled to find it believable. I was always wanting more, wanting more to have happened that "night," wanting more drama in the closet, wanting more! (Sorry, trying not to be spoiler-y).

The Bitter Truth: It was a fun book that I enjoyed reading. Obviously not for everyone. It had a heavy premise that is definitely for an older teen audience and it held my attention the whole time. Yes, it had problems. No it isn't going to win awards. Yes I enjoyed it.

Add to your GoodReads here
Posted by Lizz in Bookland at 2:37 PM