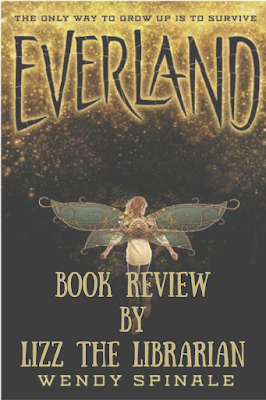 Publisher's Summary: The only way to grow up is to survive.
London has been destroyed in a blitz of bombs and disease. The only ones who have survived the destruction and the outbreak of a deadly virus are children, among them sixteen-year-old Gwen Darling and her younger siblings, Joanna and Mikey. They spend their nights scavenging and their days avoiding the deadly Marauders—the German army led by the cutthroat Captain Hanz Otto Oswald Kretschmer.
Unsure if the virus has spread past England’s borders but desperate to leave, Captain Hook is on the hunt for a cure, which he thinks can be found in one of the surviving children. He and his Marauders stalk the streets snatching children for experimentation. None ever return ...
Until one day when they grab Joanna. Gwen will stop at nothing to get her sister back, but as she sets out, she crosses paths with a daredevil named Pete. Pete offers the assistance of his gang of Lost Boys and the fierce sharpshooter Bella, who have all been living in a city hidden underground. But in a place where help has a steep price and every promise is bound by blood, it might cost Gwen more than she bargained for. And are Gwen, Pete, the Lost Boys, and Bella enough to outsmart the ruthless Captain Hook?

Why did I pick it up:  My sister recommended it to me after reading it from her OwlCrate.

Favorite Character: Hook, for sure.

Diversity Represented: Not really, nothing I remember, but it is quite possible.

Romance: Not really, but at the same time yes ...

The Good:  This is a witty retelling of the story of Peter Pan. I smiled with the (occasionally cheesy) ways the original story was tied into this dystopian adventure. Pete is a likable guy and Gwen is trying to hold it all together. I had figured out the big surprise before we got there, but that didn't spoil the fun of the book.

The Bad:  Why isn't Gwen's name Wendy? I realize that is the author's name, but still. Even Stormy would have been a fun choice as a play off of Wendy's name. It was the only really jarring thing in the story, but it still held me up at times.

The Bitter Truth: It was a super fun read that was cheesy at times, but totally appropriate for younger audiences. Perfect for fans of Peter Pan and story retellings. Makes me wish I could afford OwlCrate, but alas I'd have to cancel something else.

Book Bingo:  Recommended by a Friend
Posted by Lizz in Bookland at 5:00 PM