All the YA Books You Need in 2017: February Edition 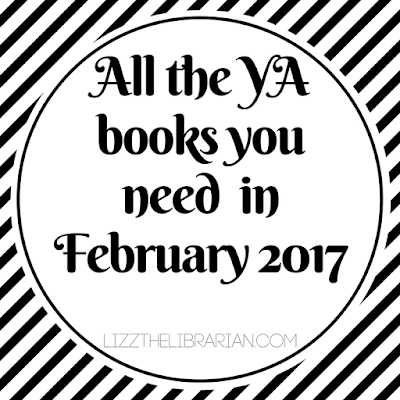 Links to go Goodreads. I've marked which ones are on my personal TBR and which I've preordered (I'm trying to keep this under control, lol).

Fairy-Tale Survival Rule No. 52:
No matter how difficult the obstacles or all-powerful the evil villain, one can rest assured that the hero of the story never dies. The sidekicks though...they should be worried.
Rexi Hood is proud to be an outlaw. After all, she's the daughter of the infamous Robin Hood. But sidekick? Accomplice? Sorry, that wasn't in her story description. Yeah, she and Princess Dorthea of Emerald have been inseparable since they teamed up to fight the wickedest witch. But if Rexi doesn't figure out how to break the curse that binds them, forget being overshadowed by the spirited princess, Rexi's going to become a Forgotten, wiped from the pages of Story and reduced to a puddle of ink.
Not happening. No way in Spell.
Rexi's plan? Steal the sword Excalibur and use its magic to write her own tale. But Gwenevere has opened a new Academy of Villains in Camelot and danger lurks behind every plot twist. And you know how it goes in Story: keep your friends close and your enemies closer...
Island of Exiles, by Erica Cameron (February 7)
In this diverse, gritty survival fantasy, a girl warrior turns against her island clan to find the brother they claim died, uncovering secrets. Perfect for fans of Graceling and Snow Like Ashes.
In Khya’s world, every breath is a battle.
On the isolated desert island of Shiara, dying young is inevitable. The clan comes before self, and protecting her home means Khya is a warrior above all else.
But when following the clan and obeying their leaders could cost her brother his life, Khya's home becomes a deadly trap. The only person who can help is Tessen, her lifelong rival and the boy who challenges her at every turn. The council she hoped to join has betrayed her, and their secrets, hundreds of years deep, reach around a world she's never seen.
To save her brother’s life and her island home, her only choice is to trust Tessen, turn against her clan, and go on the run—a betrayal and a death sentence.
Lessons in Falling, by Diana Gallagher (February 7)
When Savannah Gregory blows out her knee –and her shot at a gymnastics scholarship – she decides she’s done with the sport forever. Without gymnastics, she has more time for her best friend, Cassie. She’s content to let her fun, impulsive best friend plan a memorable senior year.
That is, until Cassie tries to kill herself.
Savannah wants to understand what happened, but Cassie refuses to talk about it and for the first time, Savannah has to find her own way. The only person she can turn to is Marcos, the boy who saved Cassie’s life. Being with him makes her see who she could be and what she really wants: gymnastics.
But Cassie doesn’t approve of Marcos or of Savannah going back to gymnastics, and the tighter she tries to hold onto Savannah, the farther it pulls them apart. Without Cassie to call the shots, Savannah discovers how capable she is on her own—and that maybe her best friend’s been holding her back all along.
The Wish Granter, by CJ Redwine (February 14) TBR
An epic, romantic, and action-packed fantasy inspired by the tale of Rumpelstiltskin, about a bastard princess who must take on an evil fae to save her brother’s soul, from C. J. Redwine, the New York Times bestselling author of The Shadow Queen. Perfect for fans of Graceling and the Lunar Chronicles.
The world has turned upside down for Thad and Ari Glavan, the bastard twins of Súndraille’s king. Their mother was murdered. The royal family died mysteriously. And now Thad sits on the throne of a kingdom whose streets are suddenly overrun with violence he can’t stop.
Growing up ignored by the nobility, Ari never wanted to be a proper princess. And when Thad suddenly starts training Ari to take his place, she realizes that her brother’s ascension to the throne wasn’t fate. It was the work of a Wish Granter named Alistair Teague who tricked Thad into wishing away both the safety of his people and his soul in exchange for the crown.
So Ari recruits the help of Thad’s enigmatic new weapons master, Sebastian Vaughn, to teach her how to fight Teague. With secret ties to Teague’s criminal empire, Sebastian might just hold the key to discovering Alistair’s weaknesses, saving Ari’s brother—and herself.
But Teague is ruthless and more than ready to destroy anyone who dares stand in his way—and now he has his sights set on the princess. And if Ari can’t outwit him, she’ll lose Sebastian, her brother…and her soul.
The Last of August, by Brittany Cavallaro (February 14)
In the second brilliant, action-packed book in the Charlotte Holmes trilogy, Jamie and Charlotte are in a chase across Europe to untangle a web of shocking truths about the Holmes and Moriarty families.
Jamie Watson and Charlotte Holmes are looking for a winter break reprieve in Sussex after a fall semester that almost got them killed. But nothing about their time off is proving simple, including Holmes and Watson’s growing feelings for each other. When Charlotte’s beloved uncle Leander goes missing from the Holmes estate—after being oddly private about his latest assignment in a German art forgery ring—the game is afoot once again, and Charlotte throws herself into a search for answers.
So begins a dangerous race through the gritty underground scene in Berlin and glittering art houses in Prague, where Holmes and Watson discover that this complicated case might change everything they know about their families, themselves, and each other.
We Are Okay, by Nina LaCour (February 14)
"You go through life thinking there’s so much you need. . . . Until you leave with only your phone, your wallet, and a picture of your mother."

Marin hasn’t spoken to anyone from her old life since the day she left everything behind. No one knows the truth about those final weeks. Not even her best friend Mabel. But even thousands of miles away from the California coast, at college in New York, Marin still feels the pull of the life and tragedy she’s tried to outrun. Now, months later, alone in an emptied dorm for winter break, Marin waits. Mabel is coming to visit and Marin will be forced to face everything that’s been left unsaid and finally confront the loneliness that has made a home in her heart.
Piecing Me Together, by Renée Watson (February 14)
A timely and powerful story about a teen girl from a poor neighborhood striving for success, from acclaimed author Renée Watson.
Jade believes she must get out of her neighborhood if she’s ever going to succeed. Her mother says she has to take every opportunity. She has. She accepted a scholarship to a mostly-white private school and even Saturday morning test prep opportunities. But some opportunities feel more demeaning than helpful. Like an invitation to join Women to Women, a mentorship program for “at-risk” girls. Except really, it’s for black girls. From “bad” neighborhoods.
But Jade doesn’t need support. And just because her mentor is black doesn’t mean she understands Jade. And maybe there are some things Jade could show these successful women about the real world and finding ways to make a real difference.
Friendships, race, privilege, identity—this compelling and thoughtful story explores the issues young women face.
A Season of Daring Greatly, by Ellen Emerson White (February 14)
Eighteen-year-old Jill Cafferty just made history. Her high school’s star pitcher, she is now the first woman drafted by a major league baseball team. Only days after her high school graduation, she’ll join the Pittsburgh Pirates’ Class A Short Season team . . . but not everyone is happy to have her there.
On top of the pressure heaped on every pitcher, Jill must deal with defying conventions and living up to impossible expectations, all while living away from home for the first time. She’ll go head-to-head against those who are determined to keep baseball an all-male sport. Despite the reassurance of coaches and managers alike, a few of her teammates are giving her trouble. The media presence following her at each game is inescapable. And to top it all off, Jill is struggling with the responsibilities of being a national hero and a role model for young women everywhere. How can she be a role model when she’s not even sure she made the right choice for herself? Didn’t baseball used to be fun?
This literary and engrossing story of a young woman trying to mark out a place for herself in a male-dominated world will captivate fans of Friday Night Lights, The Art of Fielding, John Corey Whaley, and Laurie Halse Anderson.
American Street, by Ibi Zoboi (February 14)
On the corner of American Street and Joy Road, Fabiola Toussaint thought she would finally find une belle vie—a good life.
But after they leave Port-au-Prince, Haiti, Fabiola’s mother is detained by U.S. immigration, leaving Fabiola to navigate her loud American cousins, Chantal, Donna, and Princess; the grittiness of Detroit’s west side; a new school; and a surprising romance, all on her own.
Just as she finds her footing in this strange new world, a dangerous proposition presents itself, and Fabiola soon realizes that freedom comes at a cost. Trapped at the crossroads of an impossible choice, will she pay the price for the American dream?
The Valiant, by Lesley Livingston (February 14) TBR
The youngest daughter of a proud Celtic king, Fallon has always lived in the shadow of her older sister Sorcha's legendary reputation as a warrior. But when Fallon was a young child, the armies of Julius Caesar invaded the island of Britain and her beloved older sister was killed in battle.

On the eve of her seventeenth birthday, Fallon is excited to follow in her sister's footsteps and earn her rightful place in her father's royal war band. But she never gets the chance. Instead, Fallon is captured by a band of ruthless brigands who sell her to an exclusive training school for female gladiators—and its most influential patron is none other than Julius Caesar himself. In a cruel twist of fate, Fallon's worst enemy, the man who destroyed her family, might be her only hope of survival.