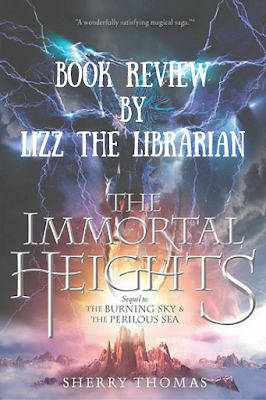 In a pursuit that has spanned continents, Iolanthe, Titus, and their friends have always managed to remain one step ahead of the forces of Atlantis. But now the Bane, the monstrous tyrant who bestrides the entire mage world, has issued his ultimatum: Titus must hand over Iolanthe, or watch as his entire realm is destroyed in a deadly rampage. Running out of time and options, Iolanthe and Titus must act decisively to deliver a final blow to the Bane, ending his reign of terror for good.
However, getting to the Bane means accomplishing the impossible—finding a way to infiltrate his crypt in the deepest recesses of the most ferociously guarded fortress in Atlantis. And everything is only made more difficult when new prophecies come to light, foretelling a doomed effort…
Iolanthe and Titus will put their love and their lives on the line. But will it be enough?
With The Immortal Heights, Sherry Thomas brings the acclaimed Elemental Trilogy to its breathtaking conclusion.

Why did I pick it up:  It's the third book in the fantastic Elemental Trilogy

Romance: Yes, absolutely at this point

The Good: Everyone is pretty hesitant as they move toward what they believe will be certain death. It's amazing that these three books take place over such a short period of time. Iolanthe is such a heroine in this story. Maybe it's because I'm writing this review the day of the #womensmarch, but I love the equality between the male and female characters. They are equally protective of each other, worried for each other, and work hard together throughout the story. So if you're looking for #girlpower, definitely check out this series.

The Bad:  This last book kind of dragged a little. I felt like some scenes (especially romance scenes and fighting scenes) were super repetitive throughout the story. It wasn't so bad, but I did feel like rushing through yet another attack to get to the end.

The Bitter Truth: The bad doesn't win out over the good because of the epic ending to this story. Thomas doesn't disappoint as the danger closes end and the series ties up. There are no neat little bows here, but it is a series definitely worth reading.

Add to your GoodReads TBR here
SaveSave
Posted by Lizz in Bookland at 1:25 PM