First Book of the New Year: Midnight at the Electric 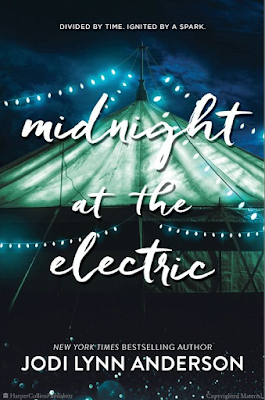 Midnight at the Electric by Jodi Lynn Anderson
My rating: 4 of 5 stars

What an unlikely story. When I originally added this to my TBR I was adding anything that looked like a Circus themed story (there is a lesson here about judging a book by it's cover).

Although nothing alike, this reminds me of when I read Wink, Poppy, Midnight last year, because it totally took me off guard and even further commits me to reading more books outside of my preferred genre this year.

Anyway, Midnight at the Electric takes place in three different women's lives in the past, present (I think), and future (she's getting ready to go to Mars, this one I'm fairly confident on). The storyline was unexpected but quite delightful.


The best part of this book thought is that is wasn't about the story, the setting, the world ... it was about the characters. Although it doesn't rival The Raven Boys as an art form, it does remind me about how when you describe the plot the book sounds terrible, because it is more about the people than what they are doing.

There is no prince charming anywhere in sight (but some supportive guys which is always awesome), but a bunch of strong women helping each other and truly succeeding.

Anyway, don't read this is you're hoping for an awesome Circus themed story, but do read if you like to read about awesome characters ;)

Posted by Lizz in Bookland at 1:36 PM