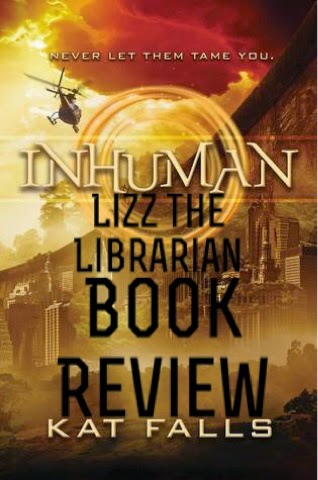 Tweet Synopsis: This is the ultimate city girl into wilds story - manimals are everywhere, Lane can't trust them, especially Rafe #badboy #savefather
Why Did I Pick It Up: It was recommended by our YA librarianGenre: Dystopian/Science FictionReminds Me Of ... the show "Dark Angel"

Favorite Character: Rafe, obviSuggested Age Range: Middle school and upRomance: HintedThe Good: In the first chapter, Lane is living a comfortable life. She is partying with friends, helping poor animals, her father is bringing in lots of money being an art dealer ... it is a good life. Unfortunately it is very short lived as the government comes in and says her father is an outlaw who goes into the Savage Zone to find treasures, and they now expect teenaged Lane to go and find him or they'll kill him. Actually, what will happen isn't that clear - it is kinda an "or else" situation.

I was a HUGE fan of Dark Angel and this book reminded me so much of that. I love the human qualities of the manimals and how Lane is at first terrified, but quickly adapts.

I love Rafe in this story, he is always himself, never wavers. We learn more about him and it sheds light on his jerk-ness, but he doesn't actually change. I like that in a story.

The Bad:
First stop on the helping Lane tour is some helpful run of the mill guy (who is so ordinary and boring I can't even remember his name). Lane swoons for him, it's a little pathetic.

Lane has a hard time being true to herself, sometimes she holds it together, sometimes she's a mess. She is dedicated to her father, but is all over the place emotionally. I wish her character was a little stronger. The Ugly: That end was not okay for lots of reasons that I won't spoil for you. However, the biggest problem is that there isn't a book two. Kat Falls has said in several interviews that she just can't get the ending right, so she won't publish book two. Seriously. Pull it together man, I need to know what happens! Who will love this book? Lovers of Dark Angel, anything else that Kat Falls writes, and Dystopian-Fantasy readersHow much did I like it? 7/10Will I read more? Yes, sheesh already Kat!Bingo 2015: none
Posted by Lizz in Bookland at 2:06 PM