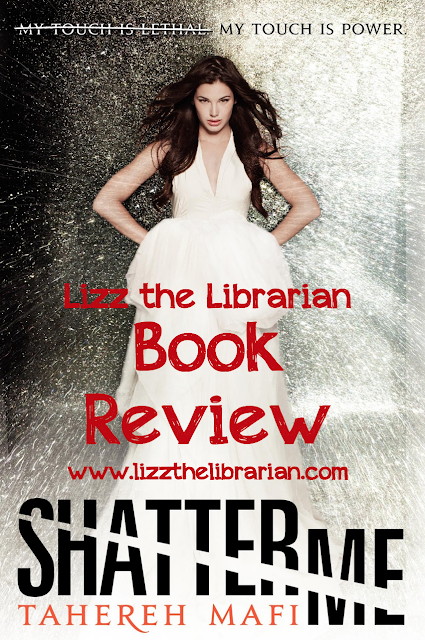 Why Did I Pick It Up: Rachel E. Carter recommended it as a great "book boyfriend"

The Good: Although this book may make you think of The Sin Eater's Daughter, since Juliette's touch kills people, it isn't that book. This book is amazing. We open on a prison and in Juliette's mind everything seems to fractured. Ever since she was a young girl her touch has killed people, sucked their life essence from their bodies (think Rogue from Xmen).

It has been over 200 days since she spoke with anyone, someone who has taken basic psychology will know that Juliette is going to be fairly broken, and she is. Not, I need a knight to come and save me, but I-don't-know-what-is-real-and-what-isn't kind of broken. Her thoughts are "shattered" and it comes out that way in the book. I love how her psyche effected the storytelling. Some people didn't get it, so readers gave it a bad review because of this - but I liked it.

I hated the way she described Adam's eyes over and over. I understood that for a time that was all Juliette could cling to because I think she was teetering on going crazy - but she still did it all the time. I started going crazy ...

The Ugly: I'll quote someone else here, "lack of world building" ... I need more. Divergent doesn't do a great job of this, but you still get the idea of why they ended up where they did. I feel like we get bits and pieces of how and why, but nothing to really describe what has happened. What happens to the people who live outside of this area? How did the jerk kid get to be in charge (or is his faceless father in charge)? Who else is in the prison and why are they there?

Who will love this book? If you like Dystopian novels like Divergent (this actually reminds me a lot of that series) or if you like the X Men or people with powers.

Will I read more? Yes, I think so