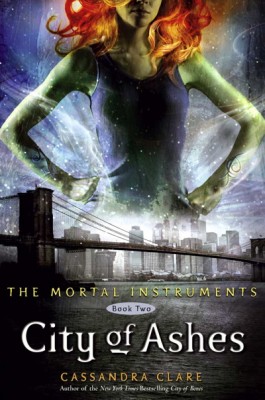 The twist from the first book makes you race through this one. Things have to get better, the HAVE to! Something is wrong, someone is lying ... except no one seems to be and it tied my stomach in knots the whole time. Clary is really wishing things would be normal again - but knows better. Her mom is in a magical coma (that totally sucks), she now is aware that everything she thought she was seeing, she actually is, and the guy she is in love with has turned out to be (well, that is a spoiler if you haven't read the first one so I'll leave that out).

The draw back to this book is I really sped through it to find out what was up with Clary and Jace's relationship. In all honesty, even though it has been less than a year (maybe less than six months) since I read it, I don't know what happened in it. It continued the story line ... which was what I wanted it for. I do remember it was exciting, I don't typically read adventures, but this one was excellent.

Dying to read it - check out an excerpt
Already read it? Check out Cassandra Clare's Deleted Scenes
Thinking about a book club (hello, summer is right around the corner), check out
discussion questions for this one

Posted by Lizz in Bookland at 9:00 AM